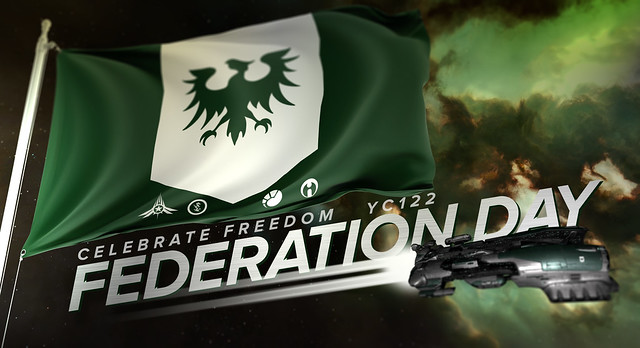 First of all, thanks to those that entered and participated in the recent Federation Day Poster competition on the Eve Forums. It was announced yesterday that I managed to place 2nd and take home some nice prizes and some isk to help fund the Yarrr! (And explode more Fed FW pilots!) I was originally not going to enter this contest but then they extended the deadline and it sounded like they needed more entries, so I decided to help out. And spread the word. Congratulations to all the winners, there were really some great entries. Well done.
Over the weekend we had a bit of back and forth over in Tweetfleet regarding the state of blogging in the Eve community. When I started this blog over ten years ago the Eve community blogging scene was jam packed with sites and more were being added all the time. We had shared events and shared topics, sites that kept track of posts, community boards, groups, and much, much more. Blogs, for a time, were the place to read about Eve adventures, news, and so much more.
Thing is, nothing lasts forever. Many bloggers never intended to last forever, they had a story to tell and told it. Or they simply bit off more than they could chew, writing a blog regularly is freakishly hard work. Or they stopped playing Eve, got married, had kids, and moved on with their lives. The other things that happened are the things that happened everywhere, Twitter, Facebook, Discord, Streaming, and every other type of social media just exploded and now everyone has a voice. Many of these things didn't even exist back in 2010 when I started blogging, or if they did they were still niche. And most of these things are much, much easier than writing a blog. Because this, this is not easy.
I've published 2,429 blog posts. Back in the early days I wrote every day that I played. That is a crap ton of content. Whenever I want to know when something happened in Eve I just search for it in the search bar on my own blog, because 99% of the time I wrote about it. The other day I was curious when the new Scorpion model was introduced, I searched, and sure enough I wrote a blog post about it. That's crazy, borderline insane, who would do something like that? Well pretty much me and Wilhelm, who has been blogging longer than me but he also blogs about more than just Eve. Although so do I sometimes. Whatever.  (NOTE: There are other long-time bloggers in our community, I didn't mean that Wilhelm and I are the only ones. That was just an example.)
The focus these days is on Streaming. Which is also difficult to do well. (Funny how that works!) And right now we are seeing the same kind of growth in that sector as we did back in the early days of blogging. Streams are everywhere. And some are popular. And some are dying. And there is a lot of content. And eventually it will all explode and settle into something. Remember when everyone had a Podcast? I do, cause I had one myself for two years. Same thing.
It is the natural order of things.
As for me? I'll be over here in the corner quietly (!) blogging along. Although I have been giving some thought to moving Eveoganda to its own website lately. So that might be a thing. Type Eveoganda.com into your browser and see what happens.
My muli-dollar Empire grows stronger every day!
community