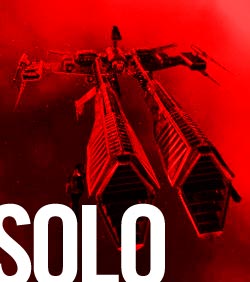 In my humble opinion, there is nothing in all of Eve as satisfying as going toe-to-toe against another player. Win or lose, 1v1 combat is the purest expression of Eve. A ballet of death and destruction that leaves all but the bitterest vet with the shakes.

Oh sure, I know. There are other exciting bits to be had in Eve. I'm not poo-pooing your game-play. I'm really not. You know I respect you all very, very much. Go forth and enjoy. This is my thing, so don't tread on me.

Thing is, Solo hunting and fighting is also incredibly boring and generally un-rewarding. I'm not going to sugar coat this for you - it kinda sucks ass.

Hours of flying around, avoiding gangs and blobs, trying to figure out if that Algos and Incursus are fighting... or are they waiting to pounce on me? Is that ship bait? Or is he legit belt ratting in a Megathron? lol. The sheer amount of pure anxiety involved in being alone in space, with only yourself with which to confer, is mind-bottling.

So Rixx is here to give you some horrible sage advice to temper your anxiety about this. I'm no expert, I am simply a dedicated idiot that loves Eve. Seriously, I am terribad. Don't listen to me. I'm only going to get you kilt.

Still reading? Good. Her are the keys to successful solo combat in Eve:

• Keep Moving
The solo pilot never stops moving. From one system to the next, and within each system, the solo pilot is a constant stream of action. This is important for two reasons, 1) It keeps you from being probed, d-scanned and generally discovered, and 2) it helps fight the incredible morose feeling of sheer boredom as system after system proves fruitless and full of ship-spinners, POS dwellers and invisible cloakers. Seriously, keep your ship in constant motion. Move quickly and strike fast. The enemy has Intel channels! ( I always assume they do anyway, "Guys, that Rixx Javix guy is in local. No, I don't know what ship he's in, he's moving toooooo fast!! ) lol

• BE the Predator
You gotta think like a Shark, like a Tiger and like a Cobra. You gotta be the Jawigerobra!! It's an attitude thing, a state of mind in which you have somehow convinced yourself that you are so much better at this than you really are. You don't need no stinkin' scout. You are Wolverine!! Your frail, paper-thin Frigate is more than a match for that Destroyer. This is so important to the success of the solo pilot. You really have to get into it. However that works for you, fine. Self-delusional people are great solo pilots. Work on that. And if you can't get it, do what some people do and fly a supporting booster alt I guess.

• Become an expert of statistical averages
As the Wise Man once said, Know your Ship. You must understand the full power, or lack thereof if you fly Amarrian, of your ship. Then, and only then, can you also understand the gazillion variations of other people's ships. And then, and seriously only then, can you calculate the precise statistical odds of success you will achieve when you derp your ship into their ship. Got it? I bet there are people who have charts. I bet there are. I don't have charts. I just fly every ship as often as possible, study killboards, read guides like this one(!) and then... and then I usually just go anyway. I mean really, I've seen everything in this game. There is really no way to be sure. Math isn't going to ensure anything. Yes, it is really good to have a fundamental grasp of Eve, its ships and game mechanics of course. But it all boils down to balls. You either have them or you don't. ( or Ovaries! )

• No Fear
Fear is the mind killer. Fear leads to hate, hate leads to... I think you get the idea. A fearful person should not be flying solo. Fear will get you kilt. Fear will lose your pod. There is simply nothing to be afraid of. You will die, explode and generally suck at solo for awhile. You will. There is no shortcut. The only way is the hard way. Practice. Practice. Practice. And skill up. And maybe try some implants, a few drugs and there is always that boosting alt.

• Live for the Fight
Despite all the boredom, fear and math, you will eventually explode someone you probably shouldn't have exploded. At that moment you must grasp the full power of what you have accomplished. Revel in it, share the km with all your friends, write a blog post about it, whatever you can do. Those moments only come around so often. They are the lifeblood of the solo pilot. Enjoy it.

Truth is, anyone can fly solo. And despite all the horrible things, it is truly worth it when it all finally comes together and you best your opponent.

Hope to see you in space.