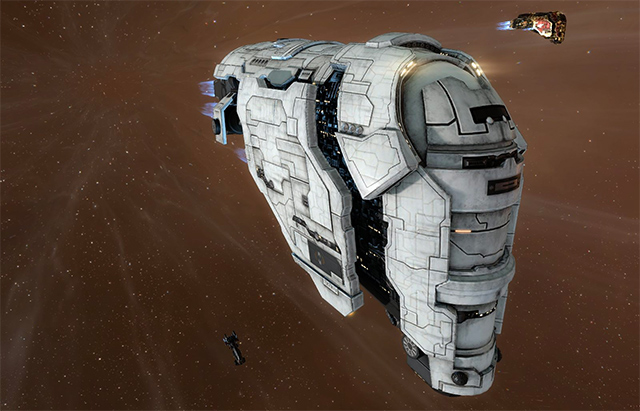 If you haven't read my last post yet, you should go check it out. It's called, "How to Survive Eve Online" and it gives some solid advice on how to play in this universe for a long time.

They say 'variety' is the spice of life and inside of Eve that is certainly true. It is all too easy to get yourself trapped in a rut. Doing the same old things over and over again, and then one day wondering where the fun went. Just as in real life, you have to take an active role in forging your own destiny. Shake things up and try something different from time to time.

That's why Monday when we were putting a fleet together I decided to fly a Guardian. We needed at least five Guardians to make the fleet work properly and I volunteered to be one of them. I obviously don't get the chance to fly Logistics very often. And by "very often" I really mean maybe ten times in the last ten years. So yeah, not very often. But I believe it is important to keep your skills honed in different areas and also helps to understand what is involved. Walk a mile in another man's shoes, or in this case fly a few jumps in another person's spaceship.

Like I mentioned, I have flown Logi before in a wide variety of different situations. But it has been almost seven years since I've flown one in a larger fleet like this one. And while I have always had a tremendous amount of respect for Logi pilots, it doesn't hurt to experience that for yourself every so often. Talk about tunnel vision. There were times during the fight that I had no idea what was happening outside of my cap chain and popping reps on my watch-listed Alliance mates. Rinse and repeat. What's happening? I have no idea, but I do know that Brutix is getting into armor and needs reps fast!

I did manage to get on two killmails, it would have been more but my poor drones got exploded. No worries, I wasn't flying Logi to get on killmails. (And that is an entirely different topic of conversation, one I've covered many times in these pages)

In a few more days my Dreadnaught skill train will finally be far enough along that I can legit undock my Moros. I just bought the fits for it last night and they will be on the weekly JF this weekend. My alt has had perfect Archon skills for almost seven years, so I've flown Carriers and Jump Freighters before - but Rixx has never flown a Capital. So I'm excited about the opportunity to open yet another chapter in his ongoing adventures. As always I'll be taking it slow at first until I get familiar with the ship. There are still sub-cap ships I don't entirely feel competent to fly yet, so sometimes it takes me awhile. Some of that comes from living in Low Sec, we don't always get the chance to fly certain ships as much as those in Null or WHs do.

I just wanted to share my experiences and encourage you to think a little differently about your own adventure inside of Eve. Don't wake up one day and realize you are in a rut. Be an active and engaged participant in your own story. Be the content you want to have.

It can be truly eye opening.