on April 30, 2010
What do you do with 100+ Sniper Battleships when they are bored out of their minds, have been on guard for hours and need to stay vigilant?  You take them ratting of course! 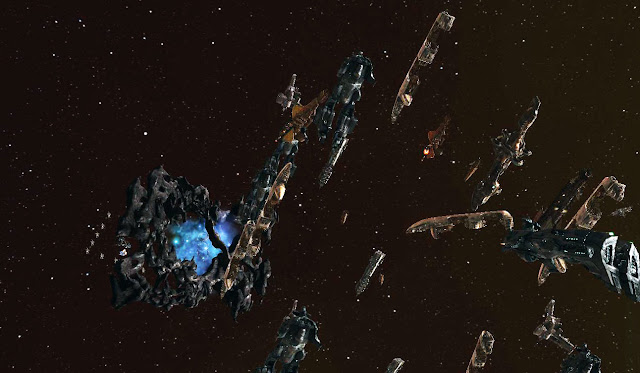 (Apologies for the crappy screenshot.  I actually took some great shots of our fleet ratting yesterday and this morning discovered that I had... well suffice to say they are not there anymore.  So this was one of the early ones before we started shooting.  Live with it.  Read the prose and build a mental picture, use your imagination for goodness sake!)

I don't remember how the idea started, to be honest I wasn't paying much attention.  (I know that makes me sound terrible, but yesterday was a hard day and I had a lot of work to get done.)  But somewhere the idea came up that we should scan for anomalies and have some fun.  Our fleet had been on station in system for several hours already and the reds hadn't shown up yet and it was beginning to look like they might not.  I give everyone extreme credit for sticking this one out!  We had to stay in system until it was 100% secure, if we left or went home and they did show up, everything we had worked so hard for over the last week could be in danger.

We had well over 120 ships in fleet, maybe 50 or 60 Sniper Battleships, don't quote me cause I didn't count them.  So someone would scan down an anomaly and then wing warp us all on top of it.  The sight of those Sansha Battleships melting under concentrated sniper fire was, despite the silliness, awe-inspiring.  I have to admit that.

I shot the first couple of times and then I just went for the fun of it.  Federation Navy ammo is a bit expensive for ratting and that, along with some Caldari Navy Antimatter, was all I had in my cargo.  You can see my Rokh floating right smack dab in the middle of the fleet in the above shot, all alone and just looking badass.

I made a bit over 2 million isk in bounties.  But didn't shoot any reds.  I'd rather have shot 2 million reds.  Thankfully there aren't that many.
Battleship Humor