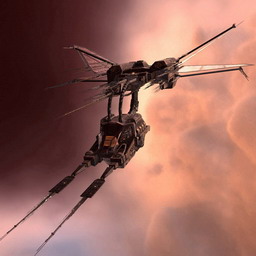 Since the advent of the current FW system mechanic I've been spending a good deal of time hunting those that participate. Mostly solo or with one or two other pilots. At first I was trying this with Merlins, Ishkurs, Rifters and other frigates and AFs - to limited success.

In order to counter something you really need to understand it. Since this "orbit without guns" thing really got up and running, understanding how to catch something usually about 75-150k away from you was a bit of a stumper.

For awhile I had some success using the Daredevil. But after losing a couple of them, what was needed was a cheaper solution. A properly fit Daredevil can be rather expensive for the poor Pirate. What else would work?

What was needed was a ship that could go extremely fast, lock from range, deliver decent dps and have a mildly tolerable tank. But also have the amazing ability to GTFO if needed. I remembered a fight I had a few weeks before. My Daredevil caught a Slasher in a belt over in Jov. I managed to kill the frigate but the fight was far from an easy one. Maybe a Slasher would work?

Since that decision I'm 16-0 in the ship. And that doesn't count the numerous fights that I've gotten into that suddenly turn south and have gotten away from. Sometimes another ship shows up to help his buddy, or sometimes the ship is bait and fully prepared to fight it out. And sometimes it is just a wee bit over your class. Just yesterday I went toe to toe against a Daredevil in my Slasher. I would've killed him had he not managed to get away. Managing that engagement was tough and I lost point for a brief moment and he slipped away. But I almost got him. In a Slasher.

The ship is especially good at catching Gal Militia, since we have a lot of those around it works well in my neighborhood. The Incursus is my favorite prey, but Catalysts are also good targets. I haven't had a chance to try it against a Rifter yet, but generally speaking you want to steer clear of Merlins. Outside of FW I mean, inside everything is a target.

I'm not going to share my fit, but you should be able to figure it out. It is rather simple and straight-forward. Guns in the highs. Long point, Scram, tank and mwd in the mids and the lows are dc and dmg mod. Simple is part of the glory and the cheapness. And speed.

Speed is the key and the faster the better. When hunting FW pilots the key is where they are when you come out of the Acceleration gate and how much attention they are paying to local. If you land 150k from them you can almost count on them getting away 8 out of 10 times, no matter how fast you are. But, if you land 70k or less, the advantage is yours and you'll catch them 8 out of 10 times. Even if you miss the first time, patience is its own reward. Remember your target has a job to do and only a short window of time in which to do it. Using that knowledge against them is the key to real success.

The Slasher is a blast to fly. But it isn't the end all to frigate combat. Knowing your limitations and avoiding situations in which those can be used against you is the key. In other words, being smart always works.