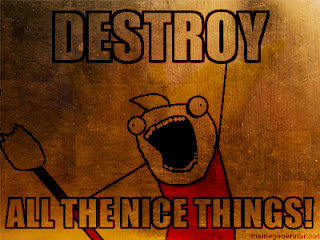 In part one of this series I took a good hard look at the moral foundation of being a scum-sucking Pirate in Eve. In this part I'll be taking a solid think about the philosophical questions that arise from such a stance.

Let's start with a biggie - killing Noobs. In your travels as a Pirate you will often encounter those that are extremely younger than you are. Sometimes they will even be "New Players". That Corax in the belt might be a eight year old player or he may have just started a month ago.

We've already established that the Destroy All Things play-style allows us the freedom to destroy the enemy no matter his age, country of origin or religious affiliations. However, as proponents of Eve and even more so as a Blogger that promotes said MMO, we'd also like to encourage more people to play. Will destroying a young players ship cause him to quit playing? We don't want that to happen. And so arises the basic conundrum of the Destroy All Things play-style.

The weight of history is against the young player. No one cut me any slack when I was first starting out. Heck, I was slaughtered mercilessly in those days. Why should I cut someone some slack now? That wouldn't be fair!

Not to mention that they are kinda asking for it. I mean, they are out in space in Low-Sec! Not attacking them would certainly send the wrong message and alter the perception of Low-Sec for generations to come. I can't allow myself to be party to that betrayal.

So here is how I've landed. Your own answers may vary. I'm going to try and destroy the enemy, I have to based on what has been established. Goodness knows he may be bait, he may be an eight year old players alt, he may have a covert cyno attached, or any number of other variables. If he truly is a young player then I will offer to talk to him afterwards and give some good solid advice.

That effort typically goes about 50/50 in my own experience. Some players are just angry or bitter about the experience and despite my best efforts refuse to take or listen to any advice. To those I offer a GF in local and send their pods home the hard way. To the rest they get the chance to talk to me and ask me anything they want. If possible, their pods are saved and free to pod-express home as reward for being decent human beings. And potential good-fights somewhere down the road.

This makes me feel better about being a scum-sucking pirate.

On a grander scale Pirates serve a counter-balance service to all of New Eden. Without us the system would collapse upon itself. Industrialist would have nothing to build. Miners wouldn't need to mine. New Eden would become stable and boring. There'd be no buffer zone between Null Space and Hi-Sec, and if you think that would be a good thing you seriously need to think again.

Pirates are the Sharks of New Eden. We cull the weak, the stupid, the incompetent and the mistake prone. We make the non-Pirates stronger. Maybe we are more like Wolves actually. We keep the Deer alert and fast of foot. Whichever analogy works better, that is the service that Pirates perform. New Eden would be a happy, comfortable and extremely boring place without us.

And no matter to which degree a Pirate chooses to pursue his own play-style, from honor bound Tusker to blobby-focused Cap dropping neighbors, the choice is buried deep in a necessary evil that promotes ALL other play-styles in Eve.

And that knowledge keeps even the worst Pirate warm at night.

In our next installment we'll take a look at the financial consequences of the Pirate play-style.