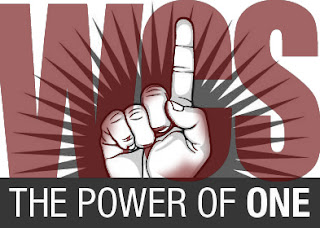 Rules exist to protect the innocent, the ignorant and those that cannot ( or will not ) help themselves. Such is the foundation of Law. An agreed upon, at least by the majority, set of "rules" by which we exist among each other. If no one acted like an idiot then we wouldn't need rules and laws would we?

It is time for a new rule in Eve. A simple rule that will save the idiots from themselves.

It is time to limit Warp Core Stabilizers to ONE PER SHIP.

In support of this effort I am forming THE POWER OF ONE FOUNDATION.
This foundation exists primarily to further the establishment of limitations on the use of and the effects of Warp Core Stabilizers throughout New Eden.

A.
Warp Core Stabilizers should continue to exist.

We are not anti-protection and believe that, however distasteful it might be to your intelligence, fitting a WCS to your ship is your personal right. And you should be allowed to do so.

B.
Only ONE WCS should be allowed on a ship.

But let's be serious. One WCS protects you enough to escape most dangerous situations, but more than one? C'mon, that is just a really bad idea.

Over the last three years, in association with the SOCIETY OF PREVENTIVE MECHANICS UNION, the RIGHT EMPIRICAL LABORERS of AMARR, the BRUTAL DOCTORS CLAN and the COLD STEEL CALDARIAN FIXERS CORPORATION, we have studied the effects of multiple WCS and have unearthed some pretty damning results.

The full report is not available at this time.

THE POWER OF ONE FOUNDATION calls upon the citizens of New Eden to rally to our support and save the puppies of Antareas IV, enough death, enough cancer, enough impotence and ugly women dating!

We can end the scourge of multiple WCS usage in our lifetime.

WE HAVE A POINT AND WE INTEND TO USE IT!