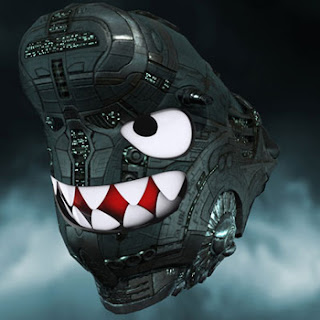 Last week was insanely busy, work, vacation, house painting and the usual insanity surrounding every other morsel on my plate. Weeee! Eve time has been at a premium, but I squeezed out some time on saturday to play.


I decided to make a quick sweep of the area and see what was going on. I randomly selected the IN Slicer for the quick tour, good ship for moving fast.

I jumped into Meut and immediately saw the Dominix on scan. My immediate thought was either mission runner or POS trash, no one else was in local and Domis dont generally... Ok he is at the Sun.

So of course I warp to the Sun! In warp a quick show info determines his age as early 2013, not old enough for a BS. Sure enough there he is, engaged and pointed. And we begin to dance. Surprised he has T2 drones, so I have to kill those now. Also surprised he knows how to manage them.

I'm not in immediate danger, but time is not on my side. Like all Amarr ships the INS is tough on cap, built for speed and quick fights, not long drawn out BS fights. I start spamming Corp. I've caught a whale and some help would be appreciated.

Akirra comes in her Caracal and Dred in his Purifier. They dont arrive fast enough and I have to disengage sooner than they can get point and the Domi slips from our grasp. None of us are happy about that and we spread out. The Domi jumps to Costolle and we give chase but he is ahead of us.

My Slicer is on fire and there are no stations in meut, so I head back to Hevrice and grab a Drake. Meanwhile the Domi has returned to Meut.  Dredd manages to find him but cant grab point. Akirra moves to Costolle in case he jumps thru, which he does and she grabs point on the gate.

We all jump in and open up. The Drake I had grabbed was a HAM variant with web and it tears into the Domi, but he is de-aggro'd and burning to the gate. It's close, but he manages to jump! And we have aggro to wait out. Grrrr. This is getting frustrating. Once Dredd jumps its clear the Domi has safed up.

Just then a couple of Stay Frostians come into Cost and Link says he'll go get his probe ship. So I sit on the Cost gate, Akirra on the Hev gate and Dredd keeps him busy in Meut while we wait. I'm sitting in a Drake alone in Cost when Dilium yellow boxes me in her Thorax. Normally I'd engage but I really want this Dominix. So I disuade Dilium in local and we talk. Apparently everyone hasn't heard about me being kicked from T**skers.

Link gets a hit and we warp into a mission gate, but the Domi is off the gate and he warps away. But this time we're ready and Dredd is right behind him. Once we all land and get point, the Domi is doomed. He can't get away this time.

Spur of the moment opportunities can be chaotic and they dont always work out. But despite the chaos, the gang worked extremely well together under difficult and stressful circumstances. Well done guys.

Skip ahead a day.

Remember my Slicer was on fire and I quickly switched to the Drake? Yeah, that'll be important in a minute.

Another quick round of the neighborhood in the Slicer and I'm finding nothing but fleets and blobs, typical weekend team play. The worst thing for the solo hunter. On my way back I spot a Gnosis on scan. My hopes are nill, gotta be hugging a POS or Station. But I have to find out and so I start hunting.

Believe it or not the darn thing is in a belt ratting! I swoop in, engage and get point. Even in the Slicer it doesnt take long to get it into structure, the damps are not helping it. At about 20% structure left my guns stop firing! They are just sitting there pulsing red. My first thought is busted crystals so I make a joke about it in corp chat. But a quick check and I realize the crystals are fine. The gosh darn guns are busted. I forgot to repair them after the fight with the Dominix.

So there I am holding down a Gnosis in hostile territory with guns that don't work. The Gnosis pilot is wondering what's going on, he convos me and wonders what is going on. Poor guy is starting to think I might let hm go. I don't tell him about the gun issue.

Eventually Dunmer Orion makes his way over to Oulley to help me finish off the poor Gnosis. I forget to tell him I'd promised to let the guys pod go and he pods him as well. It happens.

So my own stupidity cost me the Gnosis solo kill, but at least it eventually exploded. And I avoided getting caught holding him down in a belt for everyone to scan down.

PS: We may have some video of the Domi story available here shortly. I'll post it when it is available.