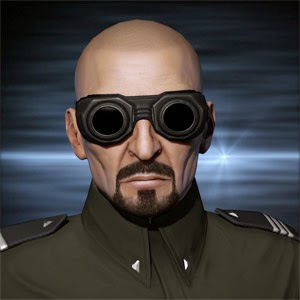 This post features Dunmer Orion - who has been with Stay Frosty almost since the beginning.

I've been playing EvE for almost 5 years, I've done most of the major activities except for incursions and Sov/Nullsec. I came into the game right after Apocrypha when wormholes and T3 cruisers were introduced. I heard about the game while listening to an interview of Mynxee on a Battlestar Galactica Podcast called "Galactica Watercooler" (GWC). I guess you can say she was my inspiration for giving the game a go! Initally, I mined and did a lot lowsec ratting and combat sites. But after a time I decided to go to the dark side. I still have alts that do industry and mine; but my primary game is Piracy. Everything else is pretty much dedicated to making isk for Pew.

I've been a reader of EVEOGANDA since I started the game in 2009. I actually considered joining LURCH back in the day. However, my playtime is varied and sporatic. It would've been hard be meet the time commitments of NullSec.

Before I came to SF I was in a small corp composed of RL friends. We could barely get together, so I spent most of my time dual-boxing an alt or true solo roaming. Since joining I have learned what it's like to fly with a great team! Comms or no comms...we kill some serious $hit! Egos are left behind and this team can make things happen! Stay Frosty fits right into my schedule...solo if you want, but there's usually a group to gang with also.

I've become a much better pilot. I've learned how deadly Frigates and Destroyers can be and win or lose I'm getting a lot of good fights! I've also learned the value flying in a small gang. This crazy group of guys really enjoy flying together...I'm proud to be a part of that :).

Find a ship you like that's cheap and you're skilled for. Then go out and fight! However, don't just throw them at anything (that comes later, lol) but think about the engagements. Over time you'll actually be able to think "while" your fighting and adjust your tactics. If you get killed, ask for the fit or check out the Killboards. You can learn a lot about fitting that way. Also, there are plenty of great PVP videos on youtube and Twitch (Kill2, Joffy Aux, Zeo...just to name a few), check them out.

Come to grips with the fact that your going to lose ships and or pods, but you should learn something from every engagement. If you're in a gang...you may lose a ship but "win" by being part of a really nice kill! Join Stay Frosty! There's always room for you and we'll answer your questions (and we have cookies).

I'd love to have a Titan kill mail...lol!

Well this one time...I got stuck in a Wormhole for like 5 hrs! Back when you really needed to know how to scan well and at the time I didn't. I entered this C3 WH that hadn't been touched in a while and didn't bookmark the entrance (I know right?!). About 30 signatures later I found the exit!

He's created a great Corp/alliance! No, drama (mostly...), no BS or egos. Just a place for folks that enjoy the game. And have you seen his Art work!? The man's a genius I tell you!

For more about A Band Apart or our Corporations, please join the in-game channels EVEOGANDA and/or The Frosty Hammer. Even if it is just to threaten to destroy us, we enjoy that too!