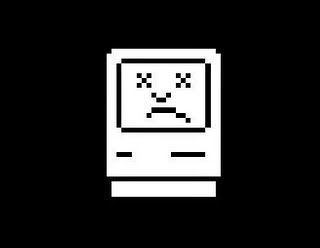 Last week, after some brief warnings, the video card in my primary Eve computer went kaput. The computer, being relatively new, was still under warranty - so off to the Apple Store it went.

I've taken some ribbing on Twitter in regards to my choice of computer systems. So I thought I'd take a moment and try to explain why I exclusively use Apple products.

I used my first Apple sometime in the late seventies. At that time I was also exposed to various other "personal computers", such as the TRS-80, the Commodore64, the Atari 400/800, and others lost to the sands of time. The Apple didn't distinguish itself from that field frankly, it was just another of the same cloth. Despite teaching myself various code, enjoying some text based adventures, and hacking into places I shouldn't have been (if you've seen WarGames, that was me at one point.), computers had very little to do with design, art, or anything else I was truly interested in.

All of which changed the day I first pulled a Macintosh from its box. Since that day in late 1984 I have been a loyal Mac user. I have personally been responsible for purchasing hundreds and hundreds of Macs over the years, including the dark years between Jobs and Mac Clones. I was a Photoshop Beta tester and served as an Adobe advisor for several years. I've met and worked with Steve Wozniak and he once helped me get 500 iPod Nano's a couple weeks before release. I installed and worked with one of the very first Mac based Digital Video Editing systems, the Media100. I've attended Mac World, I was at the very first AdTech Conference as well.

I could go on. A few years ago when I owned my own agency, we had about 40 Mac Workstations all running off of Mac servers. On my bookcase, right now, are 6 generations of Mac laptops - all of which still run just fine. I currently have two main workstations, a MacPro quad tower and this iMac. The MacPro is now located in my new offices, the iMac stays in my home office. There are also several other Macs running in my home, but they are smaller "family" computers for my kids to use.

Since 1984 I've listened to hundreds of people, many of whom I respected, tell me to switch to more mainline PCs. This was especially difficult to ignore in those dark years when it looked like Apple might very well fall apart, or just become a software company. I did once break down and purchase a PC, it lasted four hours before I returned it. I've never made that mistake again.

I've watched as the "best" changed hands over and over again. As people flitted from one platform to another. I make no judgements. In fact, for many people, the PC is certainly the better platform. But I am not "many people". For me, for what I expect from my computer, the Mac is the only choice.

I can't explain that. It has never been about speed, performance, chips, boards, or whatever else you choose to compare. My computer is my partner in the creative process, my hands, my brain, my paintbrush. And so much more. I can't explain it. But I know that Windows sucks the soul out of me. And I know the Mac OS does not.

As far as Eve goes, I only play it because it works on a Mac. I started playing when that happened. And I'll stop when it doesn't.

My computer is fixed. I'm back in the saddle again.