Don't Be A Dick 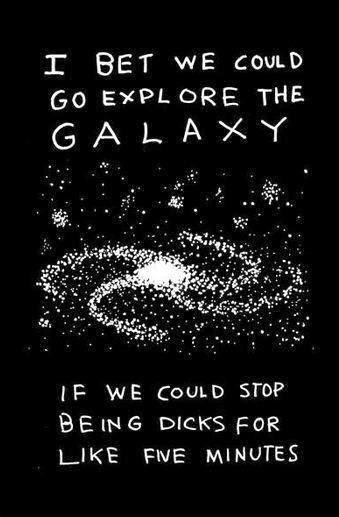 @Mikeazariah Am I off base in wondering how people could consider Wheaton's Law too high a bar to clear? @RixxJavix manages it all the time.

I have purposefully stayed out of the recent Gamergate debate making the rounds on social media, blogs and on-line gaming sites. Not because I am afraid of dangerous or sensitive topics (lol!) but simply because I've had some real life battles that have taken precedent, and focus, recently.

I've been role-playing an idealized version of myself in Eve for almost six years now and in that time I've managed to go from being the worst kind of wet behind the ears newbie to the worst kind of ebil pirate lord. I don't consider myself a "role-player" in the common sense of the word. But, let's be honest, we are all role-playing to one degree or another. It comes with the territory.) And when I say "worst" what I really mean is that I just can't bring myself to be truly evil inside or outside of the game. This is why I usually, and jokingly, refer to myself as ebil. It takes some of the edge off.

Oh I've tried. I once tried scamming someone in Jita. But I ended up having a conversation with my 'victim' and we ended up being friends. Not only did I give the ISK back, but I also bought some tasty BPOs from them. I tried jet-can baiting in High Sec once, but I sucked at it. I even once went to Todaki to bait newbies into fighting me... you can probably imagine how that turned out.

All of which has kinda rolled itself up into a big ball of blogging, playing, drawing, and generally trying to be awesome in a gaming environment that doesn't often reward anyone for striving to be a better version of themselves. Not that my personal journey has anything to do with a crusade, it doesn't. I'm quite content to live and play among the universe that CCP and, to a larger extent, the gaming community has established. But I'd be lying if I didn't admit to judging that community when it deserves to be judged.

And goodness knows I've done more than my fair share of that here in these pages. I often get labeled for it, for creating "drama", which is code for "how dare you question me!" It often reminds me of how my ex-wife looked when she was swinging an iron skillet at my head. Abusers always have reasons. And if you don't understand those reasons? Well then, you asked for it. It is, after all, you that are creating the drama around here. If only you'd get with the program, everything would be peachy.

That is not how I have lived my life. When the rebellion comes and they throw us up against the wall, I will be proud to be counted among those that stood for what is right. I've been standing, as best I can, my entire life. And I'm not going to stop now. Maybe one person can't change anything. But that is no excuse for not trying.

Like I said, I don't have a crusade. I'm just trying to be me and to play a game that I enjoy. To participate in the community and to add my voice to the void. To bring some fun, some adventure, some semblance of honor, and to find good fights. Within the context of that framework I finally decided to take it upon myself to do something about it and created a place in-game where people can come to play Eve the way they want to play Eve. Instead of sitting on the sidelines and pointing fingers, I finally understood that if I meant what I said - then I should at least try to do something about it.

So I did. Stay Frosty, and now the larger context of A Band Apart, is that place. It isn't for everyone and it was never intended to be for everyone. But for those that want, or need, or desire a place to be themselves inside a game that often forces you to be something else - we are that place. There is no greater goal. Some people come expecting something more. There isn't anything more than that. Because that is everything.

"Don't be a dick" could be our Motto. But I don't believe I should have to spell that out for anyone. It is, after all, common sense. And the heart of what it means to be a human being.

In this world of ours we need more of that. Even if it is only a small corner.