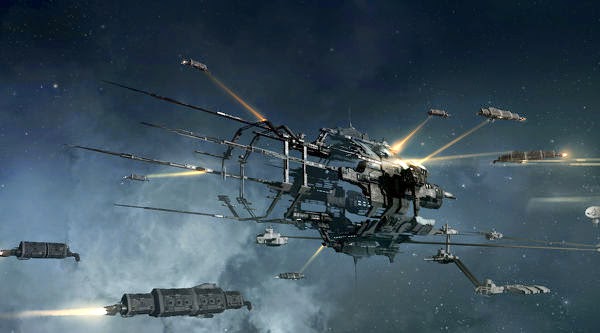 At some point down the road a ways, players in Eve are being told (as we sit by the fire all cozy in our Yoda snuggies) that we'll be able to build our own Stargates. The image above, of Badgers "building" such a thing, has been floating around the universe for a long time now. What exactly are those Badgers doing? And why are we building Stargates? Doesn't every system in Eve already got at least two of them?

So many questions. And nope, before you ask, I don't have any answers. As you know that rarely stops me from donning the ponder hat and taking a long hard look at something that puzzles my puzzler. With the upcoming changes to Jumping coming up in the next release it appears that we are on our way towards this happening sometime within the next year or so. We've taken our first step into a much larger universe.

While it would be incredibly funny if we find out that we can essentially build a gate to any system in New Eden and everyone builds theirs and points it at Jita - I hope that isn't the case. Although it would be funny. And you know that is exactly what would happen.

The real determining factor is, "Can they be aimed?" and if not, where do they lead? If you can aim them, can you aim them again? And if not, do you jump and appear in a random place? Perhaps a new place that hasn't been explored yet? Are we, as many have speculated, finally going to be allowed into Jove space, or is this somewhere entirely new?

In my opinion the first piece of this puzzle has been revealed - Caps can now use gates. This is obviously a huge clue. We can build our own gates and now, suddenly, Caps can use them. Got it. And then, just as extra incentive to actually build these things, the jump ranges on ships just got nerfed to anger levels. Apparently CCP wants us flinging our Cap ships thru these new gates of ours. Interesting.

So, let us assume for a moment that we build them and can aim them anywhere in space except High Sec. Frankly that makes no sense to me. The obvious choice would be for Null Sec Alliances to simply aim their gates at the low sec systems with High Sec gates, like Ishomilken, and use them to transport goods back and forth. While super convenient (ha!), that isn't a compelling game-play addition. So let's add a timer, since CCP loves timers, and imagine we can re-aim the gate every 24hrs or so. Once aimed, the landing system gets a warning (since everyone is in everyone's business these days) and knows the gate is aligned and in 24hrs nasty Supers will be pouring into their system. Ok. That also makes no sense. Are we also building an entirely new type of "people aimed a stargate at me" defense systems? Probably not.

The mechanic points us in yet another direction. Stargates need another stargate to work. And unless this is changing, it means there must be another gate on the other side of the one you just spent the GNP of Liberia building. These gate things have got to be more expensive than a Titan, don't they? So where does that other gate come from?

I see a couple of options. First, our shiny new gate is capable of "hacking" existing gates and making new connections to them. Suddenly the Uuna gate in Ishomilken leads, not to Uuna as usual, but all the way down to Catch! And back again? Again, rather unlikely.

Or, as seems to be the case, these new gates lead to a new land of riches and unexplored lands full of new and interesting people we can shoot and keel. Ok. So it is either Jove space or some new type of golden land full of milk and honey.

Whatever it ultimately turns out to actually be, it better be awesome. I've flown Badgers before and I know they are not capable ships. These gates are going to take a long time to build and require a shit ton of ISK. So wherever they lead, it better be worth it.

As a weapon delivery system they make no sense, at least not now. All we know for sure is that CCP wants us flinging Caps thru them. And the rest? We'll just have to wait and see.

What are your thoughts about building Star Gates?