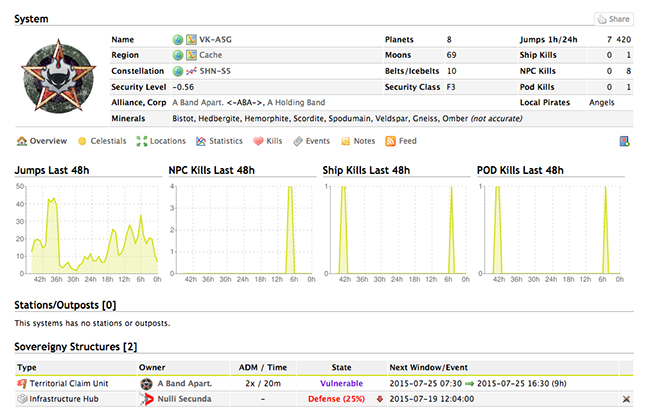 So we've been hearing a lot about this new Sovereignty system that happened recently. According to published reports there is an entirely new way to take it, hold it, and exploit it. And, like anything new, us Pirates want to know how we can steal some of that for ourselves. So last Friday when Oddsodz convo'd me and said he was deep in Null Space with an Entosis link ready to take some and would I mind if he did, of course I said, "Go for it."

In my opinion the best way to learn new things is by doing. I've never been one for reading manuals or taking courses, so Sov was taken and ABA sprang into action. Ok, "sprang" might be an overly optimistic portrayal of what actually happened. The reaction was more like, "Wut?" This is understandable, I mean it isn't like we prepared, planned, or in any other way knew this was happening before-hand. But often, that is the way of things in Eve and it is good to shake the cage every so often. Shake the dust off.

Our mates in Voodoo Children immediately planted a POS in the system for us to operate out of and started figuring out ways to get supplies into it. Meanwhile more of us pilled into local with Interceptors fitted with Entosis link thingies to spread chaos around the neighborhood. And our WH Corps started trying to roll connections as close as they could get them.

So we ran around Entosifying all the thingies. I had never done it before so I wanted to understand the process as well as possible. We were total newbs at it, but it wasn't long before we started getting the hang of it. I spent some time reading up on Fozziesov, which isn't easy to be honest. Even Evelopedia is still referencing SBUs.

I did learn that Sleepers are now aggressive. I went to Entosis a nearby station when the buggers killed me. That will teach me not to have them on my Overview! lolz.

I managed to figure out how to set our timer for a more favorable time-period, but sadly it was already too late for this specific attempt. So the system was set automatically to come out at a "not-great" time early Monday morning. It came down to about seven of us in System when the timer dropped. Our WH Corps had not been successful in rolling a hole, but they were still trying. But for a couple of hours it looked like we wouldn't need any back-up. The Node thingies spawned across the nearby systems as promised and it was off to the races. The first team to Entosis 10 Nodes would win!!

We managed to get to 8. At first local was mostly empty. Legion of xXDeathXx was slowly starting to show up. Our team even managed to explode a few of their ships and keep our Entosis ships safe. We scared off a couple of Rattlesnakes and things seemed to be going our way for a time there. But it was only a matter of time before someone showed up in an Orthrus. With our Ceptors, Vexors and a hand-full of Frigates we couldn't do much about the Orthrus and he managed to delay our final Node work until more and more of them could pull into local.

With a Station next door Legion had the benefit of home-field advantage, even with the bonuses our new Capital system was giving us. Eventually, with more than 30 ships against us, it became obvious things were not going well. We tried to ninja the last few Nodes under their noses, but they had four or five pilots working on them and - at this point - it was just me on our side. The tide of the Node Battle had turned.

I made the decision to abandon the system. To get safe and pull the POS down as soon as possible. I flew Major back to Konora and left him there in case anyone needed scouted out. And that was that.

From our perspective this operation, as sudden as it was, was a complete success.

Thanks to everyone in ABA that jumped into action and helped support the effort. We'll be hard at work perfecting our tactics, resources and plans for the next adventure. This is something new to do, something that wasn't really possible just a few months ago. And in that light, I think FozzieSov is a great success. I imagine we will be annoying as Hell.


PS: At one point the Russians pulled one of our guys into a channel and demanded to know who the heck we were and what we were doing! We all had a good laugh about that on comms. We told him to only say, "I can't tell you that, NDA" over and over again. lolz.