Ship Crews: What Have We Learned? 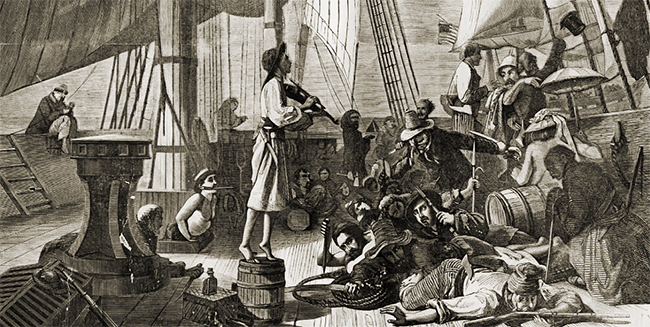 Do Capsuleers fly their ships alone suspended in their pods? Do they employ small skeleton human crews to man their ships? Do robots, or clones, or some combination of highly advanced technological solutions aid them in their flights? Is the death toll from 30,000 ship losses a day too much for the population of the universe to handle? What is the deal with ship crews in Eve?

The truth is, no one really knows. The evidence among the lore is contradictory and often vague in my humble opinion. We know for a fact that NPC ships in New Eden have crews and that the survival rate depends greatly on how those ships are destroyed. We know that ships contain Escape Pods for the crew to use. And we know that Capsuleer ships have to contain room for a Pod for us to use. After those "facts" the rest is open to some interpretation. It seems rather likely, based on what information is available, that larger ships do have crew even with one of us immortals driving.

The way each of us chooses to deal with the rest of this knowledge seems to break down into clearly defined ways in which we personally choose to deal with Eve itself. There are those that see Eve has a harsh, dark and unforgiving place who choose to believe that their crew dies each time a ship explodes. And the other end of the spectrum chooses to believe that most have a way of surviving the loss of their ship. And then an entire spectrum of faith that lies in-between. Including a wide group that chooses to believe that technology should provide a way to avoid the entire issue.

This reminds me of a debate my friends and I had back when Star Trek TNG premiered, and introduced the idea of the Enterprise crew consisting of entire families. What the heck do so many people actually DO on a Starship? A sufficiently advanced culture with AI, holodecks, instant food machines, teleporters, and every thing else - shouldn't need much in the way of crew. So why lug around so many people who are simply going to be put into harms way every episode? For anyone even remotely knowledgeable about science-fiction it isn't difficult to imagine a starship that doesn't even need humans in the first place. Much less hundreds if not thousands of them.

So it isn't a huge stretch to imagine a single Capsuleer piloting a Battleship alone floating in their pod goo. It could work. It could be as simple as clouds of nanobots flying around fixing, cleaning, and dealing with the ships needs. Heck, nanobots could just create anything needed from material on-board. Simple and clean, and no need for humans to die. Of course the lore itself seems to indicate humans are involved in some capacity, so these extra-tech concepts are not based on established knowledge.

It may be entirely possible that humans NEED work in the world of Eve. With trillions of mouths to feed, perhaps the universe is simply teeming with desperate technicians, mechanics, and astro-navigators hungry for any kind of work. No matter how dangerous it might be. That can also be true.

I suggest that the way we imagine the answer to the question of ship crews has more to do with us individually than it does with Eve. I choose to imagine a more romantic version of space travel, one popularized in science-fiction through the ages - of a ship's Captain and his loyal crew. I do so not based on any evidence, but simply because I like that version. It helps to pass the time and I also find it gives Eve more life than the alternatives. When my alt is flying her Providence across 47 jumps, it helps to imagine the passengers and crew and their adventures inside the city-sized behemoth that is that amazing transport ship. It adds and doesn't detract from my experience. I've been enjoying such flights of fancy since I first started playing Eve.

You might choose another way. And you may very well enjoy your version of the "truth" just as much as I enjoy mine. We are all correct. Our version of faith, for lack of a better term, is just as valid as any other. Because we take it all on faith when it comes right down to it. Faith in the mechanics of game-play, faith in the history of Eve, and faith in our own imaginations to fill in the cracks and explore this wondrous universe that CCP has gifted us with.

In the final analysis I choose to believe that we all have a bit of the truth within us. And, in many ways, I hope that this question never gets answered. The answers I find in my imagination, and in those of my fellow players, are a much more powerful and engaging truth - than any facts could be.

Flights of fancy. Isn't that really the heart of Eve?