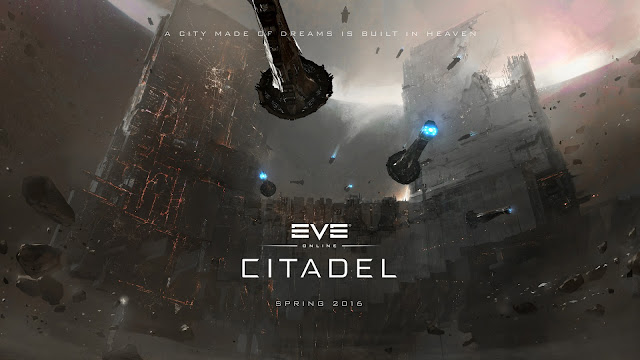 In CCP's on-going attempt to implement every single idea I've ever had into the game, today marks the launch of the Citadel expansion. Today begins the era of player built stations which will soon see the end of POS structures by this time next year. Soon space will be littered with Citadels around every corner.  What this means for the future of game-play inside of New Eden remains to be seen, but certainly it is the dawn of a new age of increasing player control.

You didn't know this was all my idea? Well it sorta is. You see, six years ago I wrote a series of posts about a new concept I called "Battle POS", which essentially boiled down to the next evolutionary stage in the old concept. Customized, module-based, built by players, formidable weapons, and transportable. In other words, a Citadel. This is just another example of CCP taking my Gooder Eve posts, changing them about a bit, and then making them happen. Which is a pretty smart plan on thier part. (I'm half-joking here by the way, but still it is amazing how many of those posts are coming true.)

I'm just getting caught up on all the news out of Fanfest. Moving your family during FF week is not a good time for keeping up with news. A few things struck me. First was just how Null-Centric this FF was. Not a lot of things for the 85% of us that don't play in Null. Second was the lack of any further details on the longer-range plans along the roadmap. At last year's FF we had a pretty good idea about Citadels already on the horizon and many of the other things that have come to pass. I thought this year we'd hear a little more about player-built Stargates and new space. That is something that has been hinted at for a long time. I know this Citadel expansion has been a beast for the Devs and I certainly appreciate the effort. But some teasing would have been nice. Its great to see our vague line on the roadmap, but a few more large themes would be appreciated.

I was also seriously bummed about how the CSM elections turned out. Not only did my candidate Joffy not get elected, but a resounding majority of Null Sec candidates did. This is a huge concern for the majority of Eve players. A low voter turnout always hurts the non-aligned candidates, we've seen that happen in previously low turn-out years. Hopefully this CSM doesn't turn out to be as horrible as other null-centric councils have in the past. But if they do, it will help us generate more voter participation next year. It always does.

Just some quick thoughts today. I'm about a week away from getting back to a normal schedule again. So enjoy the expansion and I hope to see you in space again soon.

There is a good interview with CCP Seagull in which she talks more about the road ahead.