That Time I Stole A Titan 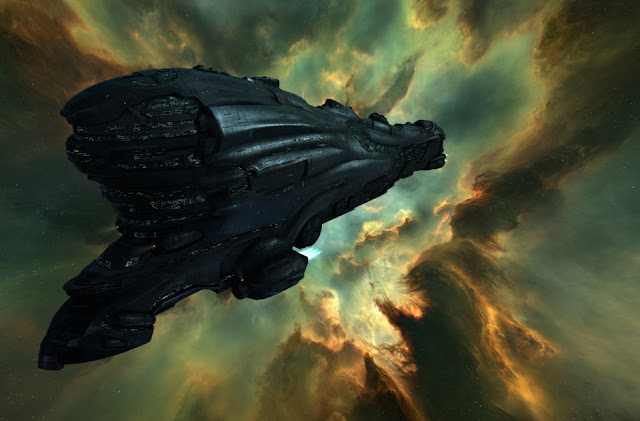 True story. Years and years ago I lived in Providence. I would often log in and no one would be about. As a low skill point relatively new player, my options were limited. As usual, I refused to be bored. So I would often make up things to do. I once flew all the way to the bottom of the map, trying not to be killed. I once did the same to the top of the map. I would shoot Russians undocking from space stations. I would solo camp Gates. I would try to guess the passwords of POS in the region. I got very good at guessing passwords.

I once found the POS that housed a AAA Titan and guessed the password to the shield. I tried to get as close as I could to the Avatar without being seen or de-cloaked in my Manticore. I have screenshots of that adventure. But it wasn't until recently that I was reminded of another adventure involving a Titan that didn't end as well. I had forgotten about the time I stole a Titan.

It might be difficult for newer players to remember a time when spotting a Titan in space was a big deal. When I started playing Eve there were about 17 Titans in the entire game. There used to be a website that actually tracked all the known Titans and where they were last seen, who flew them, etc. Seeing a Titan and surviving the encounter was a pretty big deal. The very first time I saw a Titan was when it appeared off a gate and blew us all up. I also have a screenshot of that as well.

So one day I log in and decide to take my trusty Manticore out into another region to stir up some trouble. (Please forgive me, I forget most of the details.) Eventually my wanderings brought me into a system that showed an Erebus on scan. After some nifty d-scan work I managed to discover the Moon around which the POS was located. Sure enough, inside the shields was an Erebus. Just floating there. This was my first sighting of this specific Titan. No one else was around, so I started trying to break the shield password. Which is essentially a process of stupid guessing. Over and over again. I don't specifically remember how long it took, or what the actual password was, but I do remember it being stupid. My rate back then was about 1 in 5. The 4 I couldn't break were always good passwords. The ones I could break were always dumb. It is probably not surprising how many were essentially variations of 12345ABC or something easy to remember.

By this time I had a crowd of about 5-6 other pilots with me. We tried bumping the Titan. We tried rousing our friends in other Alliances. Word spread quickly and eventually we found someone who could do it. Maybe. He hadn't actually done it yet. And he was far away. And local was starting to get busy again. The clock was ticking.

I had no idea how Titans worked back then. I figured he'd just jump in and we'd fly it home. But while the owners should have picked a better password, they did leave us with one major problem. Fuel. We didn't have any.

With time running out on us we decided on the next best thing. We jumped the Titan a few jumps away into the middle of nowhere. And left it there. I imagine somewhere in the world is a former Titan pilot who logged back into Eve one day and discovered his Erebus wasn't where he left it. I never heard another word, so I can only assume he managed to get it back safely. Or was too embarrassed to mention it to anyone.

I freely admit that parts of this story are hazy now. This happened almost a decade ago, so forgive me my memory of the details. But this is essentially what happened. For a brief moment in time I had stolen an Erebus. Much, much more than I could handle.

I guess I've been a Pirate for longer than I give myself credit for.