In a few short months Eveoganda will be celebrating its tenth year anniversary. And yes, I can't believe I'm still doing it either! While hundreds of blogs have come and gone over the last decade, this little journal of mine keeps me coming back day after day to chronicle not only Rixx's journey in Eve - but much, much more. Over the years I've transitioned from a Null Sec focused soldier in wars of sov to the Pirate Lord of Low Sec. I've tried my hand at various things, failed, triumphed, and finally found my home in the lawless regions leading a rag-tag band of amazing players in both Stay Frosty and A Band Apart. We are a scrappy bunch. We've fought in wars, defended ourselves, shown great tenacity in the Alliance Tournaments, the NEO, and many others. And along the way discovered the true meaning of Eve - friendship.

From day one this blog was intended as a journal of my personal journey. A way to share that journey with my readers and show other players the unbridled truth, good and bad, about playing Eve Online. It often became a platform for change, a place to stand on my own soap box and advocate for changes, to call out stupidity, and to bring issues into focus. At times I may have over-shared, I am after all not a professional journalist. And often my readers demanded to know more. I do not regret a single decision on that journey. I still believe it is my right, as the author, to share whatever I want in these pages. Just as it is your right, as my reader, to decide to read or not.

Blogs such as this one are not as popular as they used to be. Today we have streamers, podcasts, and other forms of sharing that have taken the spotlight from the written word. Writing a blog for ten years is hard work. I'll give you an example. In April 2013, the month I was leaving Tuskers and forming Stay Frosty, this blog had 112,495 visitors. It remains the most popular month so far. To give you a sense of how things have changed, this month we've had 10,774 visitors. Which is fine with me, I've never written a word here in the pursuit of more visitors.

But 2019 is the focus of this post. The greatest thing about this past year was my personal real life victory over my own life. A 14 year, multi-million dollar war that I finally won back in August. That war cost me everything and gained me everything worth having. It resulted in being DOXd on Reddit several times, being called every name in the book, being blocked, losing friends, and generally having to deal with idiots saying bad things about me every time I appear in certain places on-line. But it was worth it. To all of those idiots I say the following, I won. I paid my debts, fair or unfair, right or wrong, I paid them. And more. I paid every red cent myself, on my own, without help. Not a single dime of anyone else's money went into paying that debt. So there. Enough about that.

My greatest memories from 2019 involve people. Our trip to Amsterdam to send CCP Guard off, our Alaskan Cruise, Eve Toronto, and our 4th Annual Steel City Eve which is held at our home. These are the truly great memories that I cherish from the past year. Meeting fellow players, spending time with them, sharing stories, getting to know each other, and forging friendships. Real ones. I care a great deal about this community of ours and I'm looking forward to even more in 2020. 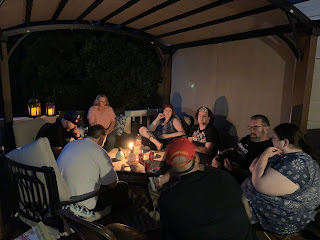 Hanging out the night before Steel City Eve 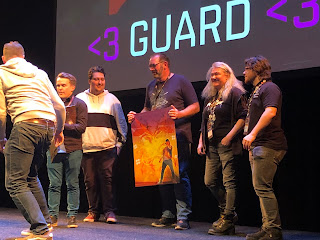 Presenting Guard with the illustration I made him in Amsterdam 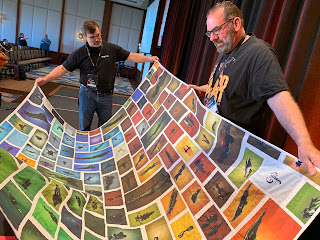 Finally getting to see the quilt made from my illustrations 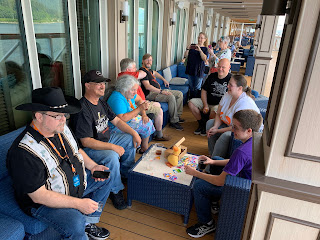 Hanging out on a Cruise Ship in Alaska with Eve Nerds!!

What a great year 2019 turned out to be. Thank you for reading, for sharing, and for being a part of that journey with me. I sincerely appreciate you.

I hope to see you in 2020, at Fanfest in Iceland, or at the 5th Annual Steel City Eve, or at any of the other events, meets, or in-game somewhere in the coming year.