The Benefits of Being Silly 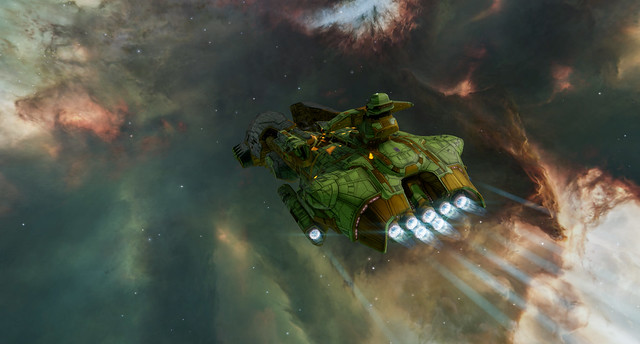 That my dear readers is a Marshlight skinned Megathron with two large smartbombs and a rack of Frigate killing medium Railguns in warp to a gate. It is an incredibly silly and obnoxious looking thing. But there were twenty or so Frigates camping that gate and I wanted to have some fun. Sadly they all ran off. Not everyone appreciates the same sense of "fun" as the Pirate Lord.

I once fitted a cloak on a Drake to try and sneak into the middle of a Pirate group in an asteroid field. That was dumb and it didn't work. I once almost solo'd an Armageddon with a Manticore, and would have, if I didn't run out of Torps. I could go on and on with other examples. I've always believed that, while internet spaceships might be serious business, there is room in this game for acts of pure silliness. In fact, I think it is critical.

And while I appreciate that not everyone agrees, I encourage that sort of attitude in Stay Frosty. If someone has a crazy, dumb, or silly idea we're more than willing to find some idiots who are willing to give it a try. At least once. And who knows, today's crazy idea is tomorrow's meta. Most of the things we take for granted as being "doctrine" today were once someone's idea of being weird. I bet everyone who tried something out for the first time was called crazy, crackpot, or worse. And yet they did it anyway.

Years ago when I lived in Null I once had the job of scouting enemy systems and logging POS towers, bookmarking them, and making note of the defenses. I enjoyed it, but it was lonely work. To help pass the time I would try breaking into the tower shields by guessing the passwords. I failed a lot. But after awhile I started finding success. I stole Nightmares, Rattlesnakes, and more. I once broke the code on a POS that held an Erebus. Sadly no one was around who could fly the damn thing.

Eve is, in so many ways, a grind. I think it is vitally important not to lose sight of the fact that you are supposed to be having fun. In fact, I strongly believe that being weird every so often can help you stay in the game. It works for me and I've been playing this game for over 12 years now.

I'm not recommending you go nuts here. But every so often do something just for the pure fun of it. Try something new. Do something your friends think is stupid. Take an Interceptor down to the edge of the map. Go see something you've always wanted to see. Take a risk. Be silly. Once in awhile let your hair down. I think you'll find that it helps you, not only to express yourself and have fun, but to see the game in a new light. A new perspective.