Sneaking up on a Titan

on January 26, 2010
The fact is that Eve itself is a work of art.  The game is incredibly beautiful, especially now with the planetary and star field updates.  I know that sometimes I take what's going on around me for granted, the ease at which this immersive and surrounding universe envelopes you is such a daily happening, that it can be easy to take it for granted.  So every once in awhile I'd like to publish a screen capture and tell you a bit more about the story behind it. 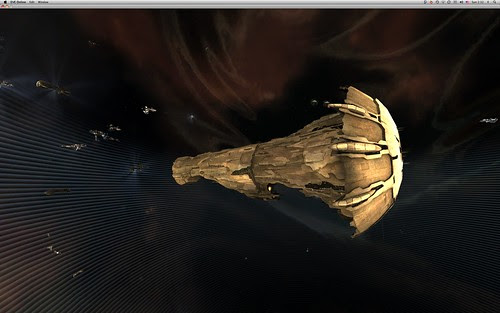 This is a -A- Avatar Titan parked in a POS in the F4R system. The pilot was Jenna Trueman and it had just arrived about twenty minutes earlier. I know this because I was on a Covert Ops mission deep in enemy territory and had been for several days when I saw this beast pop up on my scanner. This particular Titan and its pilot had been giving us trouble during the previous few weeks and only a week before had doomsday'd yours truly, an attack I survived thank you very much.


So when I saw this thing pop up on my scanner I decided to take a closer look. Local had jumped to about 200 pilots so I figured a large -A- fleet had arrived. It didn't take long to scan down the Titan and the POS. The Titan was safely behind the shields along with about 150 other red ships. So, in my infinite wisdom, I decided to see how close I could get without being detected. I was flying my trusty paper-thin Manticore and fully cloaked. I had also been in system for several hours so they had gotten used to me being there and probably thought I was AFK. So I started slow boating towards the Titan and the large, coming and going, red fleet. How close could I get?


The trick being to stay out of de-cloak range of the POS modules, the orbiting ceptors, the warping and arriving ships and any other "invisible" cloaked ships that were probably around. Not an easy task. If I was discovered I would most likely be killed, podded and back home in Providence rather quickly. It took me thirty minutes to manage to get within 20k, which is when I paused to take this screen-shot. Luckily for me the Titan happened to be rather close to the shields and I finally managed to get within 4k of the monster. Undetected. No time for a screen-shot, I made a quick joke about it in local and warped off to a safe spot.


You can see the full-size capture by clicking HERE.
Eve reds story titan