EveSpace: Home Away From Home

on February 26, 2010
I noticed over on CK's site a bunch of fellow Eve Bloggers posting their play spaces, which is always very interesting.  So, being one never shy about band-wagon jumping, I was inspired to post my own.  I just took this photo with my iPhone and made zero attempts to clean it up or add more stuff to it.  This is a snapshot in time, just the way it looked trapped in a shuttle in my new home, waiting for my fleet to be delivered.

Late last Summer I forgot to upgrade my Clone and had to re-train Heavy Missiles V, so you can see the rather large "Upgrade Clone" post-it stuck to my monitor.  Not much else is Eve related in this photo, other than my trusty Blue Snowflake microphone and the small note under the monitor, which is my ECM racial cheat-sheet (A=Y, C=B, G=AQ, M=R) which anyone who actually uses ECM Jammers will know what it means. 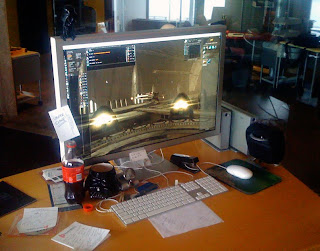 Click on the image to see it bigger.  And yes, I use Apple Mac exclusively and have since the late '70's, which probably tells you more about my age than I wanted to.  (NOTE: Yes the Mac came out in 1984, before then they were called Apple IIs.  Of course I also used to use Tandy's, Commodores and PET... heck I even had an Atari 400 which I ugraded to Atari 800 with 64k of RAM baby!  I've been a geek for a long ass time.) The actual computer is on the floor off to the side of the desk, next to the THX surround sound system.  The 2 hard drives are both 1,000 Gig (one just slightly older than the other, hence the size difference)... not sure what else to tell you.  Especially since I should be getting back to work now.