Well, not "no one" exactly.  I did blow up once on Monday.  I lost a Drake in a stupid engagement between three of us and three of them.  It started as an attack on a Curse and should have ended with the arrival of the Sliepner and the Cane.  But we fought it out and I exploded.  It happens sometimes.  And I enjoyed it.

Having fun does have something to do with being out from under the rules and regulations of the Alliances, out from under NRDS, standard fits, and the politics of it all.  I haven't read a forum post in those two weeks and I think that has more to do with the return of said fun than almost anything else.

And also, having fun has something to do with being a "pirate" now.  I've tried the pirate thing before, so it isn't anything new, but it has been a long time and I am enjoying the freedom.  At least for awhile.  I'm not sure it'll last however, we're already talking about moving back into zero.  So we'll see.

The last two weeks have also been incredibly busy in Real Life, so my Eve time has been even more limited than it normally is, which is also extremely limited.  This might also have something to do with the fun element returning.  In either case it is back and I'm glad for it.  Yeah.

Speaking of fun, I'll share with you a desktop I created awhile back based on a pilot I flew with.  In Corp chat he was always saying "touch it", which became something of an on-going joke.  I decided to create the following poster.  It is one of my favorites and I thought you might enjoy it even though you probably don't know Lord Drakken. 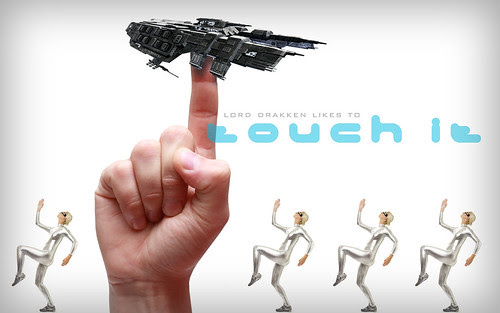 The full resolution version can be seen HERE.
Humor