on February 04, 2010
This is the first post in a series that will highlight the way that propaganda can be used within the Eve universe and how it changes as situations change within the game.  A few weeks back LFA embarked on a CVA ordered expansion into Catch, which I called operation "Catch Freedom".  At the time I figured we needed an Anthem banner, something to stir the soul and get people to join in the fight.  It was no doubt going to be a long and hard-fought war and we'd need evey pilot we could get.

Little did I know at the time how it would all turn out, and mostly I still don't know, even weeks later.  But I created the following desktop image, which I think perfectly captures the mood, spirit and gun-ho nature I was looking for.  Luckily for me I already had the ships prepared from another poster I had done, so this one didn't take a lot of time. 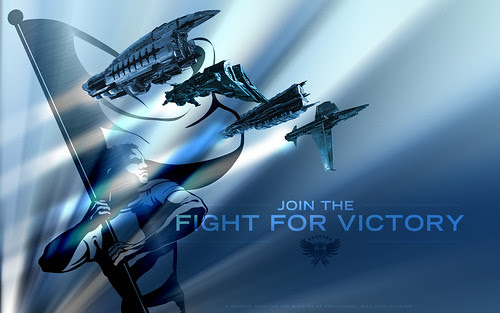 
On request, I also created a CVA version, but I'm not going to post it since I am currently not happy with CVA.
desktop Eve LFA war