A Question of Loyalty, Part One

on February 05, 2010
As I stated in my previous post about why I love Eve, I entered the game almost by accident.  Mostly I just wanted to play the thing, without fully understanding what that meant or how important decisions are in the early stages.  Heck, I didn't even read the character descriptions or backgrounders, or really anything about the game at all, before I plunged right in.  I picked Caldari because my friend had picked Gallentee, and at first I thought the idea of being a Prospector/Miner was a good choice so I could make money.  Oops.

The same was true when it came to joining my first Corporation.  A decision I put off for a long time, it sounded like something that would take a lot of effort and I just wanted to play a game.  So, when I finally relented, I joined the Corp my friend had already joined.  Shortly after I joined, the Corp decided to move to Null Space in Providence and became part of Libertas Fidelitas, or LFA.  And that is pretty much how I came to be in LFA and why that decision has stuck with me for the past eighteen months.

I realize that writing the above kinda makes it sound like I just went along with whatever was happening.  That isn't exactly how it happened, but in the final analysis its as close to the truth as matters at this point.  The point is that before the dust had settled on getting started, I found myself in zero space.  Talk about a rude awakening, but it was also the best thing that could have happened.  No lounging around Empire running missions and waiting for my skills to catch up, it was time to harden up and get down to business.  My time in Phoenix Industrial was a great way to get started in Eve and the people I met in the Corp and in the Alliance were awesome, great teachers, and many of them are still my friends today.

Thus started my adventures in LFA.  A journey that would see me leave and return to the Alliance three times, start two Corps of my own, destroy several others and question if I would ever be able to find a place where I could finally hang my hat.

This is one of the first pieces I did in Eve, a header I created for that very first Corp.  More on my history in Eve in Part Two. 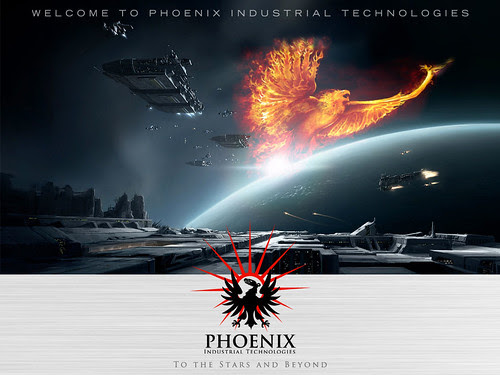