A Question of Loyalty, Part Two

I learned quickly in Eve that Prospecting/Mining was not the right career path for me.  Once I had a taste for player versus player combat I wanted more.  Being stuck with suddenly useless skills, deep in null space in a Carebear Corporation wasn't going to help things anytime soon.  But I started slow, and mostly stupid, got killed a lot more than I should have and also learned a tremendous amount.  Doing so I also started flying with other pilots that shared my goals. It was around this time that Phoenix started falling apart at the seams.  So I started looking for a new Corp.

That's when I joined Dusty Death and really started trying to focus on PvP and get my skill train on the right path.  That first month in Dusty was great and I learned a lot.  On hindsight it was probably too great, as my friend and I started thinking a bit to highly of ourselves.  We hadn't even been in the game six months yet and we started yearning for more.  It was sometime around this time that we decided to head to Empire and low-sec and start our own Merc Corp.  Ok, I'll wait until you stop laughing to go on...

Yes it was retarded.  But we gave it the 'ol college try anyway.  We had a great name, Inglorious Basterds (which no one had even heard of back then!) and dreams of being a force to be reckoned with.  We even managed to recruit some good pilots, mostly a friend of ours from Phoenix that was a Beta tester.  Believe it or not we actually started picking up some contracts and making some isk.  Things were going along pretty well for a short while.  Had we not experienced the perfect storm, I think we might have actually made something of it.  Sadly, we'll never know, because several events all happened at the same time.  It was a perfect storm.  Our friend disappeared.  We learned later that it was serious personal issues in Real Life.  This happened at the exact moment that we got our largest contract against a determined enemy.  A few other things also helped contribute to our decision to abandon INGB and head back to LFA and Dusty.  But I'll leave those for now.  (Some things are better left a mystery, even a year later.  Most of the people involved are still in-game.)

All of this was nothing compared to what would happen next.  The lessons continue. 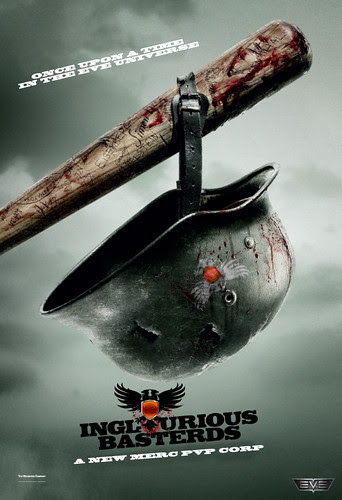 Larger version available HERE.
(This is one of the only images I've ever done that isn't 100% original, or composed of images I own or purchased.  So the image is from the original teaser poster for Inglorious Basterds and content is ©copyright its original owners.)
Corp story