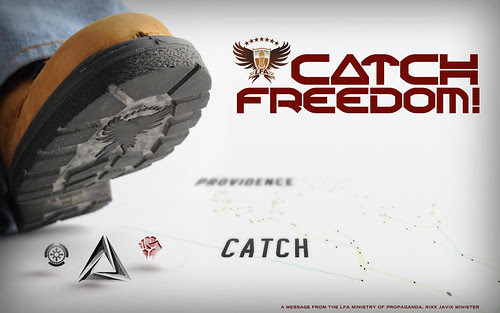 Click HERE for an embiggened version
I'm not arrogant enough to believe that this poster destroyed the LFA Alliance.  I'm also not stupid enough to think it didn't have some effect.  Just three short months after it appeared on the LFA forums, the alliance is effectively a thing of the past.  During the weeks leading up to the fall of D-GTMI an unusual amount of activity surrounded this poster on my Flickr account.  In fact, over two-thousand hits were recorded during a short burst of time leading up to that attack.  Where did those hits come from you ask?  Why, they came from the U'K Forum.

I came back to Providence specifically to help the Alliance in this campaign.  And while I was no longer privy to the politics or the command decisions, and goodness knows I still don't care enough to get involved in that drama, I was only concerned about one thing... fighting.  I was asked to create something in response to -A-'s recent propaganda spurt of activity on the forums and I responded.  The rest, as they say, is history.

I'll leave it up to others to debate what happened that really destroyed LFA.  And destroyed Providence as it was known under CVA and the Holders.  All I know is that the pressure had been mounting for months, maybe even longer, to expand.  Heck, I was in a Corp that left Providence because of that very reason.  Providence had become extremely crowded with both blues and neuts, the ratting wasn't what it used to be, the mining (especially the Moon mining) was the same... there was tremendous pressure to expand, to grow.  And right along the border were three or four systems that no one was using.  It's a simple formula.

Personally, I don't blame anyone for anything.  It is a game after all, but more importantly in my mind, at least we tried.  At first anyway.  Then we stopped trying and everything fell into chaos and carnage.

So now I've decided to return to Providence.  This time in a Corporation within the Paxton Federation.  Oh my, the times they are a changing.

And before you ask, no... I won't be creating any propaganda posters showing Paxton crushing their enemies.  That would just be asking for trouble.
History LFA Poster Propaganda