on April 08, 2010
Took the Daredevil and Dramiel duo out last night for a quick fling through low-sec and managed to get into a nice fight with an Ishtar.  We did pretty well and we should have won, we had him down into structure, but I got started on his drones later than I should have and then his buddy in the Drake showed up, so we disengaged.  I was very impressed with how tough both ships are, his Hammerhead II's had me into structure also and I held tough.  Angor's Dramiel was also down even further into structure, he was taking the brunt of the drone aggro at first.  The Drake wasn't an issue, but it was time to go.  For a first battle in our new ships we did well I thought.  Every new ship in Eve is its own beast and learning to tame that beast takes some breaking in.

So I thought since I did the Dramiel a couple of weeks ago, I should take a shot at the Daredevil this time.  I couldn't resist a nod to the comic book.  Yes, I am (or once was) a huge comic book geek (a nice one that mostly doesn't read them anymore) that even worked in the industry for awhile.  A long time ago.  So enjoy Daredevil: The Ship Without Fear on your iPhone type device.
(EDITOR: Dear Reader.  I apologize, but Rixx originally posted something that was... well subpar is the polite way to say it.  I quickly deleted the post and told him to try again, you know these flighty artisty fartsy types!  I had to stand over him with a stick, which is what I call my Taser, but he did manage to generate the following eventually.  If I wasn't actually a delusional manifestation of RJ's mind I would hit him for you, but sadly I am nothing more than that.) 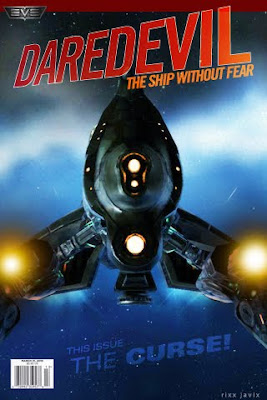