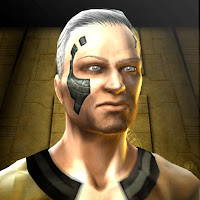 I've said this before but I took zero time on this game before I started playing it.  I saw it running on a friends computer, downloaded it and jumped right in.  I had read ZERO about it before then, never even heard of it before, never played a MMORG before and took no time at all thinking about my character, his race or anything else for that matter.  It shows doesn't it?

Ok, so my avatar sucked.  Strange for someone who cares so much about design and the way things look huh?  Yeah.  Sometimes I don't take enough time with the things I think deserve little time to think about.

It wasn't long before I realized the error of my ways.  Once I started to realize I was going to be playing Eve for a long time and be stuck with this picture of Rixx, I started to think that I had made a mistake.  Strangely however, the ugly guy had started to grow on me.  More like a fungus perhaps, but my formative months were spent under his icy gaze.  I wanted a new character picture, but part of me wanted it to still be "Rixx". 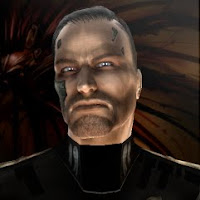 I wonder how many of our avatars look like us in real life?  Not that Rixx looks like me, he doesn't - not really.  But he sorta does, kinda.  In the way that dog owners and their dogs often seem to look alike.  But you can see from the "new" Rixx that I kept the essential elements of the original, same hair, same eyes, same five o'clock shadow, same weird cybernetic thingies on his face, and just made him a little more cool.  Darker and more serious.  But essentially it is still the guy in the original avatar.

How important are avatars in Eve?  On the one hand we never really use them for anything.  Other than the opening screen and their appearance in local or chat windows, our avatars are kind of useless.  On the other hand, they are kind of important.  They represent us and our characters both in-game and out.  But yet they really don't even exist within the game, we never see our character as they are hidden within their pod or the ship they are flying.

Maybe Incarna will change that.  If it ever happens.  But that's another post.