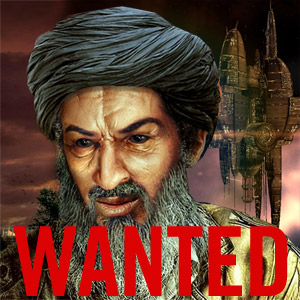 Osama Bin Laden is dead, Empress Jamyl I announced last night over intersteller channels and before a throng of thousands in the Royal Capital on Amarr Prime.  His death came as a result of Pirate activities in Gallente low-security space.  It was unclear if the Pirate factions involved were hired mercenaries or just lucky bastards in the right place at the right time.

"Tonight I am proud to report to my subjects that the criminal Bin Laden is dead."  The Empress told the crowd and the universe, her speech was delivered throughout known space and probably beyond.  "This marks a significant end to his reign of terror and Justice has been done."

This marks the end of the longest standing man hunt in New Eden's long and storied history.  Bin Laden was the most infamous militant leader of the past two decades, responsible for the destruction of the Amarrian Twin Stations and the deaths of hundreds of thousands of Amarrian and Minmatar families, not to mention hundreds of smaller scale attacks in the same period.  HIs personal bounty amounted to more than 400 billion Iskie.

Despite several close calls in capturing or podding the criminal, authorities have been unsuccessful in bringing him to justice.  Recently however, increased pressure from not only the Empire, but from several Pirate factions, has caused turmoil within Bin Laden's own network.  Last evening a criminal Machariel was intercepted in Auga (a low-security system near the notorious Old Man Star system) in which Bin Laden was being transported.  The gang responsible for the attack was comprised of members of Lucifer's Hammer, Shadow Cartel, The Defenders of Pen Island and Omega Vector.  The corpse of Bin Laden was captured and transported to a neighboring system.  Through a series of clandestine negotiations it was finally delivered to hi-security space where DNA tests confirmed its identity.

News of Bin Laden's death was especially welcomed in Minmatar space, as many of his followers came from that region of space.  Minmatar leaders have always maintained that Bin Laden's reign of terror was never sponsored or supported by any official means and condemned his actions in the past, while praising those that finally brought him to justice.

No other details were available.

[ The real world version, the above post is intended purely as a way to incorporate real world news into the Eve universe, and is not intended to take away from the significance of real world events.  No disrespect is intended. This is a blog about a fictional and virtual universe.]