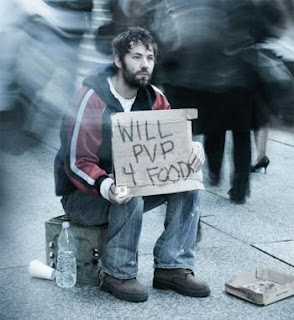 Recently I find myself with a tad more free time than I'd like. The weird thing is that while more free time might usually be construed to constitute more time for Eve, those two things don't always go together.

I admit that the lack of any response from CCP to our attempts to Bring Back the Frill!, the Frill Seekers and the highly successful Thukk You, Frill Me! in-game event, have left me rather depressed about Eve at the moment. Not horribly down in the dumps depressed or anything, I never get that way. But slightly miffed. Perturbed. However you want to classify it.

This, in conjunction with my RL changes ( which all sort of pilled on at the same time ) have left me with little motivation to blog, or tweet, or otherwise engage as I normally do.

Pile on the tremendous pressures that come from looking for new and gainful employment and you generally have a recipe for RL>Eve. Generally speaking.

On the other hand I have also managed to play more in-game Eve lately. I'm 25-7 this month, compared to 11-0 in June, 3-0 in May and 6-0 in April. So I have been taking advantage of my current situation when I can to sneak an hour here and there to play the game I talk about so much. Mostly solo roaming and ganking and trying to get into fights. The Tuskers are mostly off on a trip somewhere, but I couldn't commit to participating, given my current uncertainties. So I'm pretty much left to my own devices around the house these days.

Which is fine. I've stated many times before my desire to focus on my solo abilities and this affords me the chance to continue to do so. 19 of those 25 kills this month have been solo kills and the rest with one other pilot along with me, so the plan is working rather well.

I have no problem admitting that many of those kills are purely killboard padding and lazy slaughter of innocents. Unlike some, my goals are worn plainly on my sleeve. I am out to kill as many ships as I can. Let's use yesterday as an example of what I mean.

Yesterday saw me in several ships at various times. A merlin, an Incursus, a Drake, a Sac, a Devoter, a Broadsword, an Absolution and a Jaguar. I started off in the Incursus, still looking for a fight to see what the ship could do. I roamed about 6-8 jumps and found nothing. Eventually I returned home and found a flashy Comet hugging a gate. We stared at each other for a bit then I jumped into the next system and warped to the sun, making sure to make myself as obvious as possible. I figured I would die, but the goal was to test the Incursus and you can't do that without fighting people. Sure enough he warped in and we danced. As expected I exploded rather nicely, but I have to admit that the little ship performed well. It was closer than it probably should have been.

So I decided to do what I call "working", which is where I hang out in a system in a ship that can tank station/gate guns and wait for someone to do something. Anything. Undock, jump in, rat, warp to a planet, whatever they want. Then I go kill them. This is lazy PvP certainly, but I can write emails, answer the phone, updated my YouTube channel, and do all the things I need to do and still watch the overview and local on the edges of my browser window.

I've been having some mysterious lag issues when engaging lately. This week alone those issues have cost me about 18 kills. Those problems continued yesterday, but I did eventually track down a Rupture during my "working" session and kill her on the gate as she tried to escape. I don't know why people warp to gate at 10, but I do appreciate it. I also admire that she fought back, although she would have been better served burning for the gate.

Later I decided to try my luck with the Merlin again and went on another roam. All I found was a huge cluster of Black Rifters hanging out, so I turned around and went back home. Lo and behold a Drake on scan! In a belt!?!? I quickly docked up and undocked in one of my Drakes and warped to the belt. Sure enough he was still there. The outcome was never in doubt, although the Drake I happened to pick was interestingly fit, he went down without much trouble. With some nice tears in local afterwards.

The thing is, both of those kills were Cherry Poppers. That is my term for someone's first death. They were both Virgins to death in Eve. Should I feel bad about killing those ships and podding one of them? If so, I don't.  All I know is that they represent 30 points and more than make up for the 8 points the Incursus cost me.

Does that make me a heartless pirate? I hope so. Cause that is what I'm trying to accomplish here.