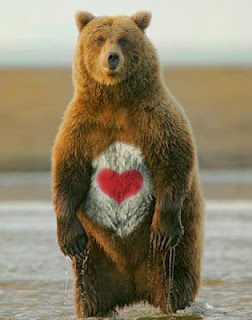 Carebearaphobia - The irrational fear of Care Bears in New Eden.

And like many of those pesky irrational fear thingies, this one makes no sense either.

It isn't based on traditional definitions of "fear" exactly, because let's be honest here - we have absolutely nothing to be afraid of when it comes to Miners, Haulers, Traders, Plex and Mission Runners and their ilk. They are, as the great Douglas Adams might say, Mostly Harmless.

So from where does this new word spring? And why is it the greatest fear of all decent Pirates in the universe?

Insidious creeping fear my friends. The deep underlying fear that the Care Bear mentality will slowly and inexorably suck the PvP from the marrow of your bones and draw you increasingly into its profitable web of LP Stores, Market Hubs, Luxury Items, T2 Production and the eternal dangers of buying a Hulk - just to make some extra iskies.

What are the warning signs you might ask? And well you should! Be on the lookout for some of the following:

• You warp into a FW Minor/Major to kill the punks in there only to realize the pilot is in YOUR Corporation!

• Corp chat has words that you don't understand in it, like... well, how should I know!! Words that sound Carebeary. Its like the people in there are talking about building things and trading and buying things with LP points - whatever those are. Sheesh. I don't speak Japanese either, but I know it when I hear it.

• You'll know when you warn your Corp mates about it, over a month ago, by saying soon they'd be putting up a POS... and then they do!

• The number of blues your Corporation has, which should be zero, is suddenly growing.

These are some of the early signs. But Carebearaphobia is the slow death, so keep vigilant and be alert to even the smallest changes in your fellow pilots. When you get into trouble and everyone who could help is off in Jita making a "run", don't be fooled! They are trading!!

The only cure for it is good fights. Plenty of bloody, tear-filled death and honest destruction. So grab your fellow pilots by the hand and force them into a gang to go kill something. Remind them of the beauty inherent in explosions, missile trails and rapidly firing auto-cannons. The sweet ballet of death.

The future of their soul is in your hands.