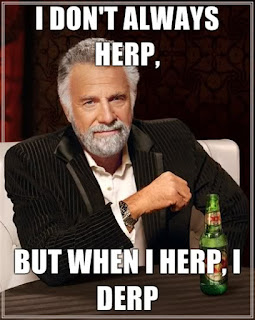 And yes, I took a bit of a blogging vacation this week.

As usual Stan sends out the call for yet another Blog Banter, this one a self-serving opportunity to lay some heavy recognition on the community and point fingers at people. I can't help but be reminded of those shiny people in High School that broke each other's arms patting themselves on the back for bullshit awards like "most likely to succeed" and whatnot.

I never was very shiny.

My "vacation" this week came about in part because of this BB honestly. I'm usually one of the first to jump up and write something in response. But this time I struggled. At first I wasn't sure why exactly. But as the week has worn on it has become increasingly obvious to me.

Right up front. This has nothing to do with Stan or anything to do with the BB, both of which I admire and look forward to. But I won't be participating in pointing fingers, calling out my fellow bloggers, or otherwise ignoring anyone. No matter how well written or thoughtful I can be, which I can, someone will get left out. And I'm not going to do that to anyone. Believe it or not, every single blog on my reading list is on there for a reason. Because I read them! Every one. Every post.

Having read the various other posts in the BB43 I'm caught by the general "sameness" of the community response. The usual, usuals and the typical responses in general. As if the Eve Community had about 5 people in it. It doesn't by the way. High School Student Council did though. And while there are those that do more than others, those that like to see their names bandied about, those that feed on the adulation of others, there are many, many more that do this - that participate - because they love Eve. And to those, you know who you are, I say congrats. I'm your biggest fan.

So I have no awards to give out. Instead I would like to point one giant finger at the Eve Community and say the following: Thank you!

Every time a new post pops to the top of my list I click with anticipation and dive right in. You make my days more interesting, teach me things about corners of Eve I don't care about, show me funny things, tell me cool stories and generally keep me entertained. It isn't easy doing what we do, dragging your ass into a post and trying to get your point across. But you guys do it, get it and keep doing it. So thank you. Every single last one of you.

Back in the 1970s Stan Lee used to hand out No-Prizes in his column as Editor of Marvel Comics. I'd like to hand out a No-Prize to every Eve Blogger. You guys have earned it.