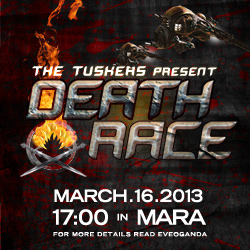 On March 16th, 2013 at 17:00 Eve time, thousands of racers will gather in Mara to compete in the DeathRace! The DeathRace is exactly what its name portends, a race thru the worst of New Eden Low Security space to the death!

Join us on March 16th to compete for billions in prizes, ISK and the honor of finishing this brutal, no-holds-barred race in the purest Eve tradition.

The DeathRace will take place beginning at 17:00 sharp. All participants who x up in MARA local will be invited into Racing fleets. Only racers in official racing fleets will be eligible for prizes. The starting gate will be announced in local an hour prior to the race beginning.

The DeathRace will have FOUR sections and will travel across approximately 75 systems total. Be aware that the systems will include Low Security and Null Space systems, but no High Security space. It is entirely possible, and hopeful, that many of these systems will be camped.

There is NO entrance fee to participate. All pilots are eligible. Certain ship classes are not eligible, see rules below for details.

Fighting is encouraged and allowed. Your odds of winning increase as more ships are removed from the race. Additional prizes will be awarded to those with the most kills, etc., specific prizes will be announced at a future date.

1. Race begins at 17:00 Eve time in MARA.
2. Racers who x-up for official DR Fleets one hour prior to the race will be eligible to compete.
3. No fighting or podding is allowed before 17:00. Any racers who do so will be kicked from fleet and not eligible for prizes.
4. ANY Ship class is acceptable except for the following: T3 Cruisers and any ship capable of warping cloaked.
5. Fighting is encouraged and allowed after 17:00 but podding is not. Anyone who pods another racer will be kicked from fleet and not eligible for prizes.
6. There is no entrance fee to participate.
7. Prizes will be awarded in order of finish as determined by The Tuskers. We plan on recording the finish and publishing the video after the race. Other feeds and video streams will be announced.
8. Prizes will also be awarded in various other categories, these will be announced at a later date.
9. Members of the Tuskers are not eligible for prizes but may participate in the race if they want. Although I will think less of them since they should be helping instead!
10. HAVE FUN!!

The first DeathRace back in 2010 raised over 6 Billion in ISK/Prizes that I awarded after the race. We are actively looking for sponsors for this event! Sponsor a prize, a ship class, whatever your imagination can imagine, or just donate to the general prize pool. Contact me at rixxjavix@gmail.com and we can discuss.

Many people have contacted me already and I will be getting back to you. But everyone can help by spreading the word! Tell your Corp and your Alliance, post this information on forums and on the corner light post. Spread the word on social media and everywhere that Eve players congregate. The more racers we have the more fun everyone will have!!


In the upper left of this blog are links to support graphics and a link to these rules. Those will be updated as race day approaches.


This is an official Tusker event. As such all rules, decisions on prizes, conduct, fleet organization and event coordination is the decision of the Corporation. All decisions are final.


Thank you. Spread the word.