The Man Behind Rixx 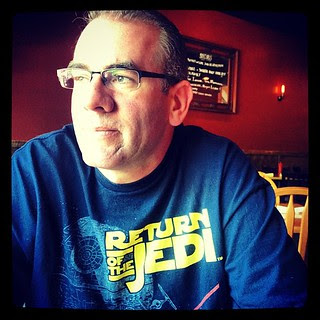 My personal identity has never been a secret. Rather it has been something I just rarely talk about, and over the past four years, something I've never officially written about on these pages. It always seemed like a good idea to keep this Eve-centric journal Eve-centric. Not to mention that when I started this blog my life was rather... uh, complicated. To say the least.

At this point I'll disappoint you by noting that I'm not anyone famous. I know, bummer right? My name is Bryan Ward and I am a life-long geek of the highest order. ( For those of you hitting Google now, be sure to search "Bryan Ward Giant Ideas", the results are better. ) If you are interested in all of my business shenanigans a good Google search should satisfy your curiosity. I am the wearer of many, many hats but I did once own a great little agency called Giant Ideas for over a decade. Sadly, due to the economy and several bad decisions from a couple of clients and one employee, we had to close our doors last January. My long-time readers will remember it as the time I stopped blogging.

That was a rough spell. Which also included a messy, long and expensive divorce.

I've had an extremely interesting career. One I am proud of. But I thought I'd tell you some things about me from the "geek/nerd" perspective, things that aren't exactly part of the public knowledge base. Like Eve, I've been involved in one form or another, in geek culture my entire life.

Back in the early to mid eighties I was a small part of the independent Comic Book resurgence. I self-published a popular fanzine of my own comic book work (xerox'ed and mailed about 1,200 copies every three months!) as well as paid work for many of the up-and-coming publishers at the time. I had two concepts considered by Vertigo, ghost-wrote several issues of a popular main-stream comic and then got my big break, along with my partner, from Caliber Press ( The publisher of The Crow ). Sadly, my partner got cold feet and backed out on me. At the same time my real career was taking off and comics took a back seat for awhile.

I also did some early work on Dungeons and Dragons, as well as a competitor project. But that's another story.

I became an extremely early adopter of computer technology. I was an original stock owner in Apple and a life-long fan. Some friends and I became Beta Testers for Adobe Photoshop and eventually members of the semi-official Photoshop Advisory Board which helped bring about Postscript integration in layers, and then became the National Association of Photoshop Professionals. Which is kind of cool.

I started working for Marvel Comics thru Fleer Entertainment and got the chance to use my comic book knowledge to create most of Fleer's comic book based card sets during the early nineties.

These things were extremely popular! If you happen to own a set of Marvel Metal cards, then that is my work. Heck, just about all the card sets from that period. The best moment however, was creating a Marvel themed card game called OverPower. That was an amazing project. I still have dozens of un-cut card sheets! The worst moment was cutting the hands of dozens of children on "real metal" promo cards we handed out in New York! Yikes. I still have one in my desk drawer at work, a constant reminder to be humble.

I also helped to launch the Panasonic 3DO next-gen console game system. And the world's first Platinum credit card ( sorry about that one! ). This is right around the time the early Internet started to hit and I was involved from the early days in creating sites and using new media, teaching myself Macromedia Director and making early Flash animations.

I wrote movie reviews for one of the first movie review sites, about fifty or so. For awhile I was even listed as a reviewer on Rotten Tomatoes, but not anymore. I even did some spy work for Harry Knowles back in the day. One of the sites I created back then is still up and running, but I'm not allowed to talk about that one.

I have four WGA registered movie scripts, one of which came very close to being purchased by MGM a few years back. Sadly that one was the victim of extremely bad timing and never got off the ground.

I've written, produced, directed, edited, or otherwise created over a thousand television commercials. Including one of the first shot in HD, SONY was a client at the time and let me borrow one of their prototypes for testing. I even write songs, for commercials.

And here is where I start to feel a tad weird. I've never been comfortable talking about myself and prefer to be the person behind the curtain, quietly working away, making things happen, but never in front of the camera. It all seems so impressive when written down and condensed like that, but all those words above represent thirty plus years of extremely hard work, luck and determination to not fail. And yet, tons and tons of actual failure. When we write history we tend to gloss over the stumbles, the mistakes and the utter failures. There have been many of those as well, trust me.

Like the television show I produced that was picked up by a cable network only to have the partners involved bicker and fight until the whole thing collapsed. Or my horrible decade long divorce to my first wife which cost me virtually everything, except my son. All of which proves nothing, except success is a fleeting and transient thing my friends. The true worth is in the journey, not the destination.

My own life has turned to personal happiness these days. I'm happily married now, with an even bigger family. And I've tried to focus on what is important.

I wrote this post because I thought you might be interested. If not, then no harm done, but now that my life has settled down I'd like the division between myself and Rixx to be less obvious. Sometimes real life is important to write about as well.

I'll leave you with this compilation video I did last year that showcases some of my commercial work. You might enjoy it. The person at the very beginning is me, the clip is from a Cloverfield Trailer parody that we did that won us two Webby awards.

Now, back to Eve.