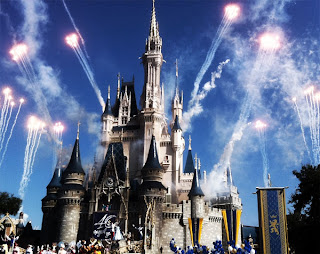 During the recent Crossing Zebra's podcast in which MArc Scaurus and myself talked with Xander about Low Sec, I made the point that Low Security space is still looking for its Disney World.

What exactly did I mean?

Let's face it, the interior of Florida is a friggin' Hell Hole. Swamps, humidity, bugs, alligators and waste-land as far as the eye can see. If you've ever been there you know what I'm talking about. But imagine it BEFORE Walt Disney decided to plant his magical kingdom there and transform the natural waste-land into an artificial waste-land that attracts millions of tourists every year. No insult intended for anyone that lives in Central Florida, but it is pretty horrible.

But it has Disney. And Disney begat an entire industry of like-minded tourist attractions that caused Central Florida to thrive over the past half-century. It isn't a Hell Hole anymore ( well, the humidity, bugs, alligators and trailer parks still survive, but so do a lot of other things that aren't so horrible, including a lot of very nice people. Not one of which knows where anything is, don't get me started on that hellish adventure! Back to our story ).

Low Sec is Central Florida in the 1940s. Full of hardy souls who trap Alligators for their skins, rejects from the coasts, retired millworkers, adventurers looking for their pot of gold, and those that really just don't care what the rest of you think. Disney and Air Conditioning haven't yet arrived.

All of us that live in Low Sec love it for its natural beauty. In fact, most of us think it is the purtiest darn place in all of New Eden. But even we have to admit that jobs are scarce. The heat isn't the dry kind. And our neighbors are kind of pompous truth be told. High Sec gets all the goods and Null gets all the glory. And best we not talk about the precious ones living in the Spa Lands of Wormhole space.

What can be done? What should be done?

How can we get those rich folk from up north to drag their sorry asses down to Low Sec and spend their Madison Avenue salaries in our neck of the woods? We need a serious attraction. Something that you simply can't get anywhere else. We need a Disney World. Or Land. I always forget which is which.

I have some idears I'll shove at you good readers. Feel free to mock them in the comments.

I don't know what else to call it. But it is a mineral that can only be found in Low Sec belt rocks. You need this mineral to do important things that carebears do in order to make the things we buy. This seems like a pretty easy one to swallow and I'm not sure why we don't have this already. I've been asking for it for a really long time. So duh.

So every pirate corp/alliance has a home base. Stay Frosty owns Hevrice, Shadow live in Goinard, Brave Newbies just moved to Bart, BrB lives in Osti, etc etc. These systems are known to us that care and to those that fear. Why not make it more official? How about a system of "Pirate Controlled Systems"? Based purely on activity a Pirate group could obtain control of a Low Sec system officially, it shows up on the overview or something. This system is Stay Frosty's or something. Much like owning a Null Sec system but without the structure reqs. In exchange, that pirate group can tax activity in that system and reap the rewards for protection rackets, ratting, mission running and FW activity.

Details to be determined but this is such a weird idea that just popped out of my head I need more time to think about it. But I like the idea of it.


Those are just two and I'm sure I could come up with more. But the idea is to give Low Sec something of its own. Something other regions don't have.

To be honest I'm torn. I like Low Sec just the way it is right now. Do I really want to turn it into a Theme Park? An over-developed waste-land of water parks, miniature golf emporiums and cheap eats?

To quote Civilization, maybe "the old ways are best"?