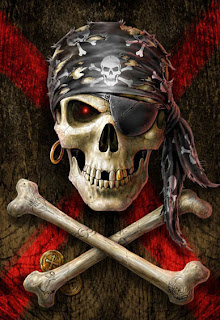 Based on yesterday's post I've decided to start a series of discussions to explore ways in which Low Security space can be improved, without destroying the core value that it currently has. Enhanced Low Sec.

Yesterday I threw out some quick ideas regarding rare minerals and a sort of "Sov Lite" concept. Both of those have their pros and cons, but both have complications that need to be considered. The last thing anyone wants is to turn Low Sec into Null Space for the lazy, or give us structures to grind.

So I thought I'd start this series off with perhaps the easiest idea of them all. One that requires very little work on CCP's part, since the infrastructure already exists. It conveniently fits within the current Meta and enhances the story-line in unexpected ways.

Pirate Corporations whose mean average Corp Security Status remain under -5 should be allowed to join a Pirate Faction.

Guristas, Serpentis, Angel Cartel, Blood Raiders and Sansha's Nation are all currently existing Anti-Factions that exist in New Eden. They are the Bad Guys. It would only be natural for nefarious organizations to align themselves with one or the other to fight the established Empires and their Faction War puppets.

Doing so would work in much the same way that the current FW system works, just in a villainy way. Destroying FW ships in Plex would not only continue to be a fun way to spend the afternoon, but would also earn LP. LP that could be exchanged for discounted anti-faction gear/ships/mods in the local LP store.

With me so far?

This step would go a long way towards explaining why Low Sec continues to be Low Sec, give the Faction War people a reason to hate us even more, and also give pirates that choose to participate, rewards for doing so. It would encourage activity in Low Sec without destroying the very foundations of how Low Sec is built.

And it would add meaning to that activity, beyond personal satisfaction. It impacts actual play-style very little, but adds rewards that make sense and are valuable to the participants.

It is a relatively "DUH" thought.

This week we've talked about the role that Lore plays in New Eden, this is yet another step towards integrating the back story even further into real play.

Honestly, as much as I've tried, I've yet to think of a single negative that would stop this idea from happening. I only wonder why it isn't an option already?

And no, I don't think this is "the idea" that saves Low Sec. ( We could argue that Low Sec is in need of being saved, since I like it just the way it is, but that's another post. ) But this seems to me like a no-brainer addition that takes advantage of current in-game infrastructure, requires little additional coding or content development, and that could be implemented 'as-is' for the most part.