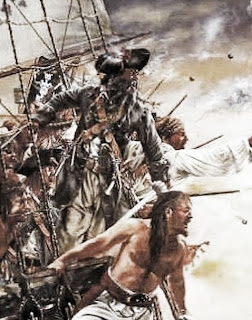 I dragged my sorry carcass out to the dock, stinking of pod fluid, cigar smoke, and rum... speaking of which, I finished off the last of the Hevrice Brown Derby - swished it around in my mouth and spit into the infinity pool. My bleary eye cleared enough to see nothing in my fleet that inspired me. I found the console and another day of ship fitting yawned before me.

Ehh, screw it. Rip up another Fed Navy and let's get undocked. Half-assed I caught up on the news and the crap going on down in Minmatar space, while I put on my boots, lit a new cigar, and scanned the nights kills and losses. I am a multi-tasking bastard and by the time I'd taken the usual morning piss over the edge, my ship was finally ready.

I settled into my seat under the pod, told the back-up crew to go fuck themselves, and fired up the engines. Some hi-sec pussies might need four or five guys to fly these things, but I prefer to do it myself. If anyone is going to load the wrong god-damn ammo into the guns, it might as well be me. I laugh as the ship launches into the void. Half expected some lazy camper from next door, but the undock was clear. I banged my head against the bulkhead, to clear the cobwebs and to silence the ringing from the implant. That damn pirate piece of crap doesn't take well to rum buzz.

Chased a few losers out of my Plex, all of them stabbed to Hell and back. I waved at two of them before giving them the finger. Yeah, yeah, best of luck to you, ya bastards. You won't always be so damn lucky. I cleared the system and headed over a few more jumps. More stabbed cloaking idiots later found a Hookbill on scan. I paused, lots of traffic usually equals trap. Whatever, screw it. I went in anyway. What do you know, he wants to fight. Surprise, sensor damps! That's a new twist. Sorry though, those things ain't gonna help ya none. I smiled for the first time today, this wasn't going to be a total waste of a day. He fought well, but the end was never in doubt.

Might as well loot the wreck and hope someone comes to kill me while I do it. Which they don't sadly. By this time some of my mates are around and we start picking up a few here and there. Rabble rabble. The game is afoot. Must be the rum talking, I never say things like that.

Rinse and repeat. Runners run and fighters fight, but today the world is full of runners. System after system of little men in little ships, spinning for empty promises of fame and glory for Empire's that treat them like something found on their shoes. I don't get it, but to each his own. Just don't bring that into my space. You can label it whatever you want, but until you fight for it, it ain't yours.

You go to all the trouble to triple-stab your damn ship and then sit there while I kill you? I don't pretend to understand these people. Sometimes, someone will ask me, why bother with them? And then I point to something like that and I say... because. That pretty much shuts up any more dumb questions right there.

By this time we had a decent little gang together and Agroc brought his shiny new Dram along to try out. I hoped he was ready for it, he was bitchin' about technical problems all the way out to Black Rise. But he seemed sturdy enough and he finally got himself a decent scrape with a Corax. I aligned to the fight but held off, I know he wanted this one for himself. But I also didn't want him losing the damn thing on the first day, so I finally warped in and helped him finish up.

We caught a few more fish and then swung back towards home. That's when I saw the Wolf on scan. A Comet and a Dram shouldn't have much trouble with a Wolf, and with Agroc behind me off scan, I warped into him. Normally I'd have approached the fight slightly differently, but knowing what was coming behind me, I played it rather aggressive. That's when Agroc's Dram starting having serious technical issues and stopped operating. Just flat out gave up the ghost leaving me holding the bill. Pirate Frigs! All I could do was let the pod slide down over me and turn into a fish for the ride home.

It ain't the first time an easy fight turned into a bad one, and it won't be the last.

My message board dinged while I was docking. Another fan letter from a recent victim, "You suck ass!!" That's right fishie, you explode with stabs on your ship and I'm the one that sucks ass. More of you need to die in a fire, let me fit up another ship and I'll be right back.

More rum first. And another cigar, this one is all wet now.