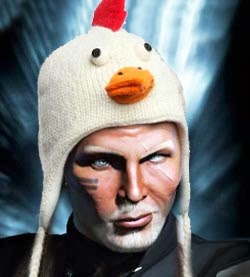 The list of people, corporations and alliances this guy has pissed off over the years is as long as a Rokh, and yet he is still in the game. Still flying around like he owns the place. The more I think about it, the more annoyed I get.

I think I'll go over and comment on one of his losses again...

It annoys me to no end that the dude is so horrible at Eve! I mean, seriously, has he not been playing for over five years - and he still sucks!?!? My friends and I tell him about it all the freaking time and yet he still doesn't get it. His fits are terrible, his tactics suck, and he throws ships around like they were made of pixels or something.

He doesn't even post on the Forums!! What is wrong with this guy? He is so terrible that it makes terrible look good. I can't specifically quantify why, exactly, he is terrible... I mean, I've only been playing Eve for a short time myself. But give me some time and get back to me.

I know right. How else can you explain those 200 misfits that are following him around Low Sec? They must all be AFK or docked up all the time, or something! I mean, no one reads his blog, or uses his art services, or follows him on Twitter, or G+, or watches his stoopid videos... well, you know what I mean. No one that I know does.

He isn't even in ANY of the special channels that I hang out in!! Dude is so lucky. How easy is it to write a dumb blog for six years, sheesh. No, I don't have a six year old blog myself, I'm too busy hanging out with my L33T friends. Yeah, mostly we bash Rixx. Lucky bastard.


4. He Actually Seems to Enjoy Eve

This annoys me to no end! I think he actually has fun playing Eve. Good God, everyone knows Eve is serious business and shouldn't be enjoyed. I mean seriously, I'm miserable playing Eve most of the time. And when I'm not miserable, I'm annoyed. Mostly by people like Rixx. Ok, mostly by Rixx.

Eve is dark, complicated, and mean. Rixx treats it like a stinking video game and it annoys the Hell out of everyone I know. Whatever. I'll just keep being mean and miserable. Eventually everyone will recognize me for the awesome l33t pilot I am and Rixx will stop getting all the atten... I mean. Damn. Point #5 please.

Over the years we've thrown everything we have at him. We sent him down to Null Sec when he was only a few weeks old, we knew he couldn't do it. He'd fail. We sent cloaky Vagabonds, huge red fleets, gate camps, millions of bubbles, structure grinds, and plenty of l33t pilots his way. Heck, we arranged four major wars to kill the guy. We collapsed every single alliance he belonged to, stole all his assets, kicked him across the universe, banished him to NPC space, pushed him into Syndicate, shot his friends, kicked his corp, collapsed his alliances, punched him in the face, betrayed his trust, mocked him in local, chased him endlessly, blobbed him, ganked him, used ecm in 1v1s, ran from him, spit in his eye, stole his secrets, emptied his hangars, and generally made his life miserable for over five years.

And none of it has worked. What the Hell?!? This whole article is starting to annoy me. I'm taking a break. I think I'll go annoy someone in High Sec for awhile.