4 Years Ago: The Night of Shattered Carriers 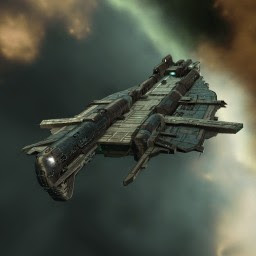 
As our systems in Providence fall like dominoes before the red hordes our resolve and our spirit remain high.  Every day brings new operations aimed at stemming the tide and holding fast against overwhelming odds.  And while each of us knows it is only a matter of time, I think we still believe that the exact time is something we have some control over.

Last night in I7S we proved once again that we won't be going down easy.  The system was already pinned down by SBUs and the station was rapidly on its way through reinforce, repair services were down and had been all day.  We knew that the enemy would be coming in to finish what they had started, so we were prepared and waiting.  It started with small skirmishes around the neighboring systems as the fleet began killing one of the SBUs.

It didn't take long for the enemy to hot drop a fleet of carriers on top of us and the battle was on.  You can read the battle report (EDITOR, the Paxton KB link doesn't work anymore) for yourself, and while the total numbers are certainly in our favor there is one statistic that bears a second look.  That's right, we killed 15 Carriers!  (I know the PXF Battle Report says 17 but two of those are repeats for some reason.)  Oh, and we didn't lose a single one.

Strangely enough Pandemic Legion arrived on the field with a nice force of mostly T3 Legions and Tengus to assist.  I say strangely because no one seemed exactly sure where they came from or why they were helping us, PL being a long-time foe**.  Obviously it doesn't take a rocket scientist to figure it out, but last night it was a bit cloudy.  I wasted some time tackling a PL Zealot before it all got straightened out.

As anyone who reads this blog knows, I am not a fan of large fleet battles.  But I realize they do have their place in the universe.  And sometimes, like last night, they can be things of beauty.  The grid games, the mass of bubbles, wrecks, fire, explosions, carriers, fighters and the sheer awesomeness on display was certainly eye catching.  But the real beauty for me was the execution and coordination of our efforts.  From tackle to Sniper to Guardians waiting to rep our damage inside POS shields, the battle went well because we worked together.

For my part, having lost my dps ships during the week, I decided to provide tackle in my trusty Taranis and Crow.  During most of the battle my hardy Ranis was on fire and trailing smoke.  There are few sights that get my heart pounding as much as my Taranis trailing smoke while pointing a Carrier and popping fighters.  Eventually the damage became so significant, only 10% structure left, that I had to park it and bring out the Crow.

In the end I pointed and tackled 12 ships, including 6 Carriers, as well as helping to bring down one of the evil SBUs.  With no losses.  They tried, but they didn't get me.  Not then anyway.


**Future Rixx: Interesting reading this now, since the entire thread that ended up bringing PL onto the field to help us started with a simple convo with Vile Rat weeks before. I couldn't say that at the time of course.