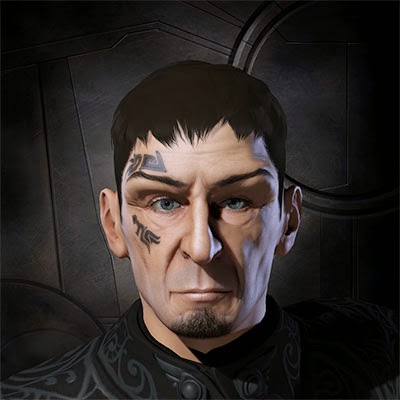 This post features Draiv Solregard, a Director in Stay Frosty and one of the pilots I rely upon to make everything work so well. (Or not, depending on how you look at it.)

I originally joined Eve because I had a few friends who were playing it.  But when push came to shove I was left playing alone most of the time.  So I had a lot to think about and try to digest as I explored the wonderful world of spaceships.  Showing the game to my brother eventually caused him to sign up and so we began trying stuff out in Eve.

My background covers and still does, a large portion of PvE content.  I really enjoy doing various types of PvE stuff, I ran missions and puttered around High-sec for just over a year even with Eve's lack of normal MMO questing.  I really enjoyed questing during the many years I played WoW and a sprinkling of other MMO's.  So when I had finally made it to level 4 missions and realized how few there were I started to wonder what was left in Eve.

This year in High-sec I spent pretty much solo or playing with my brother.  Eve instilled such a strong impression of distrust I figured everybody was a rabid froth spewing blood craving lunatic and avoided interaction with other players because of this image which is projected to those who don't play Eve.

I heard about Stay Frosty from reading Rixx's blog.

However I ended up at Rixx's blog through a long chain of web links in my search for more information about Eve.  After visiting the page several times I decided to read what he had posted on the front page.  The writing was entertaining, and he didn't sound like a rabid froth spewing blood craving lunatic even if he did shoot all the things.  I followed the blog for quite awhile and even participated in the "Death Race" where I made it to the final system (only to DIAF).  It was lots of fun and got me out of High-sec for the very first time.  I didn't win any of the prizes but I was proud when I got a few kills and did the most damage on the smart-bombing battleship bit.  Long story short (too late) I continued reading his blog and my blog list continued to grow.  I finally reached a point in Eve where I was going to quit, instead I took inspiration from the few blogs I read on a regular basis and decided to start blogging myself.  Feeling uncertain with my decision and quitting still on my mind, Rixx announced on his blog that recruitment was open for Stay Frosty so I hopped over to his Evoganda channel,

I enjoy the mostly carefree attitude and loyalty our members show to each other.  When someone calls for help; they jump right in with whatever they have before the threat has even been described.  This has led to a lot of unnecessary losses where people point, laugh, and bring up those kill-mails as some sort of insult or failure.  I see all that red (some of those losses being quite expensive) and I don't see failure.  What I see are friends who are not risk averse and are willing to keep throwing ships at the threat even though we have clearly lost.

Too much to make any kind of coherent paragraph out of it.

Make sure you have some sort of income because you will have losses, after which don't be afraid to engage.  You're out and about to shoot stuff, so make sure to shoot stuff!  Accept the fact that your lovely ship may get blown up and enjoy your time together while you still can.

I personally want to win more fights and solidify income so I can work up to bigger ships when needed.  Breaking the "meta" is another long term goal, I find Eve has lost a lot of its ingenuity due to the player base stamping on anything new or innovative.

As for the corporation I'd like it to achieve a point of great activity in and out of Eve.  A good Eve foundation is built on the good social interaction available, being able to have that around would be a great benefit for any corporation.  It's amazing I even stayed in Eve as long as I did with how stale the PvE content can become.

I was podded in Hevrice and woke up 22 jumps away.  Considering it was late and I was tired the first thing you should do after being podded is to update your clone.  Being the uber l33t PvPer that I am with my 40+ million skill points I got me the appropriate clone for 45 million.  Hopped into another ship and started hoofing it back to Hevrice.  Since it was a rather long flight I took the time to do inventory on where stuff was located and how much ISK is needed for resupply, etc...  I open my wallet to see I'm suddenly missing 45 mISK.  There was a good'ol WTF moment as I tried to figure out where it went.  Then my most recent purchase registered and I guess I subconsciously decided I was l33t enough to be Clone Grade Phi.

The fact he listens when I ramble, and that he's kept me around this long.
(EDITOR: He does ramble a lot btw.)


More to come. If you are like Draiv and getting kinda tired of the same 'ol same 'ol and thinking of quitting Eve... why not take a chance and become an ebil fun-loving pirate instead? Join our EVEOGANDA in-game channel and suit up. We take everyone. No blood tests required.