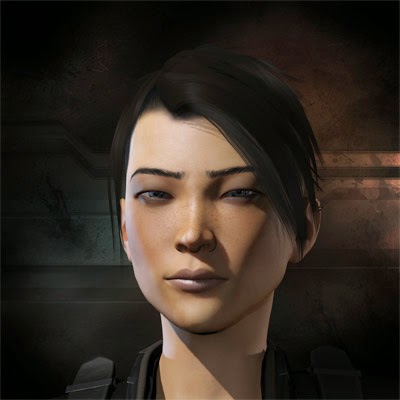 This post features Pixie Lorraine, who has been with Stay Frosty for over four months now.

First time I gave up Eve during trial, then played some other game (Darkfall I think). When this did not really take off I came back to Eve, and this time for good. After quite some time of mostly exploration I joined a corp that just moved out to null. While it was fun to suddenly be in the middle of nowhere, I had no clue about how to do logistics, and the scale of what was offered by the corp was beyond me (moving assets worth billions when I had maybe 20M at the time). I remember making 50 jumps routes in a cloaky rifter.

Afterwards, I moved a bit around faction warfare, became briefly a renter, and finally got started on PvP with my first solo kill. I was flying with Scum at the time, and when a couple of older players left for their own corp due to burnout, I followed. Should have known that this would not last, so I ended up stranded without a corp.

Stay frosty at the time. I had an eye on the killboard for quite a time to learn about fittings. As well as the one from the tuskers. Then I started to read more blogs and found Eveoganda. With my playing time per day limited to most often a short hour, and already living in low-sec, Stay Frosty seemed the perfect new home for me. So I headed towards Hevrice to apply, managed to get the final blow on a Tusker and just evaded being killed by SeaElder from Stay Frosty before joining.

You undock and you are immediately in action. If you want in a small fleet, on other days when I prefer it a bit more quiet solo. You can try whatever you want, play however you want. Nobody reminds you constantly to be on comms or to mind your killboard efficiency. (Although I might like a bit more comms sometimes, but that is up to me to improve).

Mostly, I focus on learning how to fly frigates. And while I am not doing so bad at recognizing which fights to take, or what tactics to use, I am still hopelessly lost in space. Usually I realize after the fight that I have actually never even looked at the other ship. That is a long way to manual piloting.

• Do you have any advice for players just getting started? (as pirate, you mean?)

The usual. Focus on a solid ship with well defined tactics (Breacher comes to mind). Have an experienced player explain them to you (thank you STSxLight). Then go and fight.
Train skills according to the exact ship you fly.

Improve my piloting skills. Widen the range of ships I like flying. Have fun!

Well, I will reveal how I got on my very first killmail.
I was daringly flying in my rifter into low-sec (Amamake) and saw this Reaper. An easy kill for me! So I quickly locked him up and activated guns. And was sitting in my pod. Obviously I did not know about gate guns. Lucky for me the reaper died shortly after as well and my damage contribution of 23 got me on the mail.

He is so very helpful!
After joining Stay Frosty I had a little bit of starting difficulties, until I fleeted up with Rixx and he immediately helped by putting me on the kb .