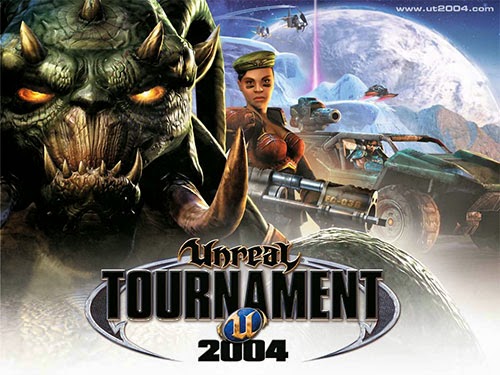 There was a brief moment in time when I loved a video game more than I love Eve. The result of a unique set of circumstances that cannot be re-created, helped to make Unreal Tournament 2004 the perfect video game for its time.

When I started my own company in the Fall of 2001 it was just me with big dreams and a brand new computer. I had no idea what I was getting myself into, and nor did I care. Over the next few years the company grew and I surrounded myself with extremely talented and passionate people. Most of whom also happened to be geeks and nerds. Our offices back then were located in an awesome old warehouse that had been upgraded over the years into a modern cozy working space. We eventually took over multiple floors, but the building added a level of intimacy that is missing from many working spaces. The building was its own character.

I only mention this as a way of setting up the relentless slaughter and blood-shed that resulted in that space once we discovered UT04. Our lunches and late night candle burning deadline crunching evenings would be interspersed with Deathmatches and Capture the Flag moments of epic proportions.

UT04 went beyond that however. The greatness of the game turned out to be a community of developers, coders, and regular people who built worlds and characters and mods that filled servers far and wide. All of us consumed these mods and downloaded all of them that we could. Each day brought new worlds to play in, new mods to try out and new technical challenges.

I even bought a PC laptop (ostensibly so we could 'test' website development on it) primarily so I could load the world-building program and build my own battlegrounds. Somewhere out there exists several really awesome UT04 worlds that I built and shared with the community.

The LAN setup meant we could quickly build and connect all of our workstations and join up to fight each other to the death. This was my first experience with multi-player video games where I was fighting more than one other person I knew in real life. Sometimes we'd have 10-12 or more involved. And typically we were sitting so close, or on speaker phones, so that we could yell and scream and sometimes punch the person next to us.

Sadly, as all things do, this moment in time passed long before it should have. Changes in the business, the relentless train of software and operating updates, and other pressures eventually put an end to it all.

I see that UT04 lives on. And I've tried the other console based versions, but nothing can re-create for me what made that moment special. I can't bring it back. But it existed and even though it was brief, it was also glorious.

When I think back over the years to games I've enjoyed, the things I remember most are the situations, the people, and the moments that made them special. It isn't usually the game itself that sticks with you, but the other things surrounding the game that make it special and memorable.

UT04 was one such moment in time.

PS: This run really started with UT99 and ended with UT04, I just collected the memories into the 04 version since it was the end of that run.

PPS: All the way back to Pong I had played games with other people of course. Even in the early days of Castle Wolfenstein and DOOM we'd manage to throw a few people into the mix. But this was the first time I had 10-12 people at a time playing the same game.