I continue to add more posters to the "Art Print" series, you can check out the ever-growing catalog of images by clicking these blue words. I've also created a page here on the blog ------->> over there, that I'm using to post new images and also write footnotes to each as I post them.

Last week I had a rather large project fall in my lap out here in the real world, the kind of project that pays the mortgage for two months, so I've been kinda busy. Working late nights, all weekend, and will be until the middle of this week, so not much time at all for Eve. I do get to pick at art during the long renders and that is where most of this recent spat of Eve work has originated from. Two weeks ago I picked up a project that, among other things, involved a building sized poster of an old three-masted ship. I needed to illustrate the ship using vectors so that the scale would work when blown up to such a large format. This is when I cracked open a bottle of forgotten skills and essentially invented, improved and modified a process that resulted in these images as well.

There are known filters and plug-ins that will transform a pixel based image into a vector based image. I have a bunch of them that I use for various things when the situation calls for it. But they wouldn't work for the ship and they really don't work all that well for these Eve ships either. Although I do that for many of the posters and art I create from time to time. These however, needed a bit more attention.

I'm very old school when it comes to Photoshop, I rarely use filters. I am so old school that I was a Beta tester, that's how long I've been using Photoshop professionally. I can still make shadows on images without using a single layer, and that is old! So the process I use, in a nutshell, is rather complicated and sometimes easy. But it is often really freaking hard to get right. While I can tell you "how" I do something, I can't tell you how to be good at it.

You have to start with a perfect image. This is sometimes easy and sometimes takes a lot of work. But the better you can make your first image, the better the final results will be. Even the most complicated of Eve ships, thankfully, share a common color palette. So once my initial image is perfect and pulled out of any backgrounds, cleaned up, contrasted, color corrected, smoothed, and otherwise made to look real purty - it is time to pull channels. The very first channel is the outline, which I usually make black or grey or whatever the darkest ship color might be. The rest get pulled based on color, typically 6-7 channels, sometimes more or less. Each channel represents a color. And yes, none of these will have shading yet. That is yet another channel. (And where most of the actual work comes in later, think bitmap) These channels are rendered as vectors, layered in Illustrator and then shaded using the gradient tools, artistic license and a good, practiced eye. It sounds complicated but, if everything goes well, it can take as little as 15 minutes. Although some of the more complicated ships take about an hour.

At some point, when everything is combined, you'll end up with something that looks like this: 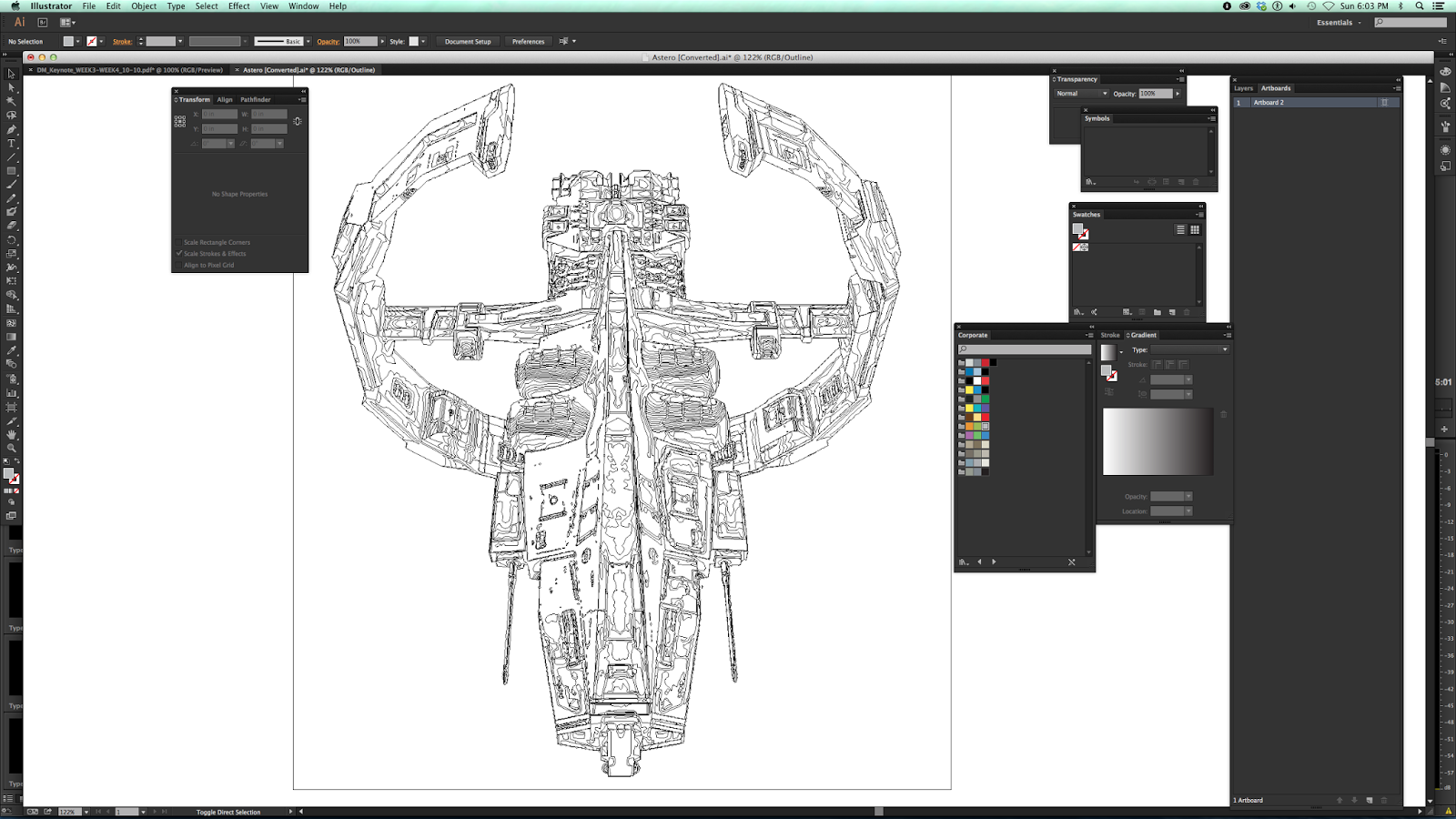 That is probably more than anyone wanted to know about this, but hopefully someone will find it interesting. This is a fun project and I'm enjoying working on it, takes my mind away from some of the more mundane things I have to do in order to make a living. Which is what free art is supposed to do.

Now, what ship shall I create next?