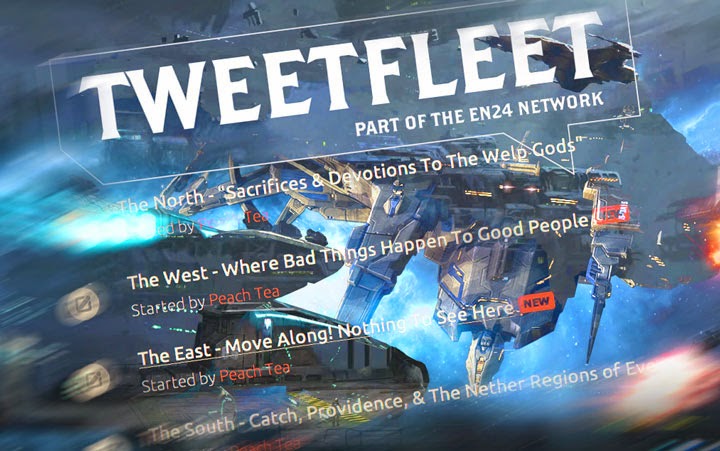 So I wake up this morning to some turmoil over on Twitter. I'm slow waking up and it takes me a few minutes to get up to speed. But it quickly becomes apparent that EN24 has finally launched their new forum feature under the title "Tweetfleet" and that the hastag #Tweetfleet users are pretty gosh darn upset about it. That much I get pretty fast, I am after all a quick study.

There is a lot of history here, which I am not all that interested in re-telling. Suffice to say that I don't have a dog is this fight, but I have always been partial to EN24 simply because they sometimes pull my blog posts (and then I get to enjoy the awesome comments!) and they are not run by the Mittani. Anyone that knows me, or reads this blog, should know I am no fan of ego-maniacal Oligarchies. I'm a Pirate at heart and I believe in competition, free markets, puppies, and wuv. Ok, fine. I do try to get along with everyone is the point I'm trying to make.

I will also be open and tell you that Enrique and I speak often. He will often hit me up to chat about things in general, Eve related and otherwise. Been doing this for years. This is also not unusual, frankly there are hundreds of people in Eve that do the same thing. Just last night I spent time chatting with someone about the merits of Open Recruitment. I also gave someone else advice on promoting a new Podcast. I do this a lot.

So instead of joining in on the Twitter outrage, I decided to hit him up for a chat. As we are talking things are only getting worse over on Twitter and people are starting to get pretty angry. A lot of people seem to have very strong opinions about Riverini, which I don't understand. In my dealings he has always been level headed and reasonable. He is also very concerned about the reaction. And upset about it. All of which is understandable. I won't relay everything we discussed, but suffice to say it all eventually works itself out. Diplomacy, what a concept.

We've all done things with the best of intentions that we've screwed up the execution in some way. I think this is a classic example of that in action. I do believe the intentions happened to be good ones, but the execution could have been better. I believe that is rather obvious in hindsight. I also know that everyone wants it to work, at least as a trial, so changes will be made in good faith.

We all make mistakes. And we all tend to rush to judgement sometimes. Somewhere in-between those two things is where Diplomacy lives. Someone told me that in Providence years ago and I've never forgotten it. (Thanks VR, never forget!)

The funny part is, I don't even use forums. (Unless I have to.)

So let's see what happens next.