This one time at Band Camp 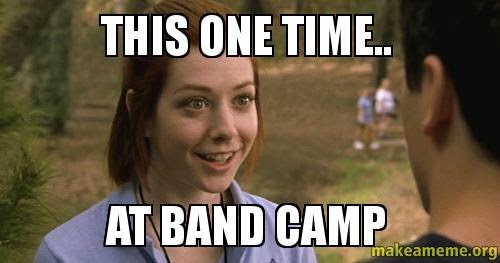 Anyone who has been reading this blog for any length of time knows by now that I don't take myself very seriously. I learned long ago that making fun of yourself first tended to avoid most of life's discomforts, disarming your enemies, and endearing yourself to your friends. If you can't laugh at yourself... In other words I like to have fun. I am a serious person, but I also like to enjoy life. You get the idea.

So I find this hilarious.


I've been getting my balls busted lately over something I did on Saturday during the (now) controversial Titan kill event in Ishomilken. The Blobserver even wrote up a funny post about it. Which my wife found the other day and sent me the link, making it even funnier. I imagine my wife at work doing a Google search on Rixx Javix. I find that hysterical. Life is weird man.

So all of this boils down to a simple thing. Having lost a Devoter and two Harpies in the convoluted 10% TiDi mess happening in my backyard, I decided I was going to end the day on the positive side of the killmail ISK balance sheet come Hell or high water. Someone else in Stay Frosty was having serious luck with a Smart-bombing Thorax. Their fit had a large SB in the highs and nothing else! That seemed a bit much for me, so I went with a rack of SBs and filled in the rest with looted mods. However, I had a low slot open. Knowing I'd be warping into the middle of 2,000 ships, and that I'd die eventually and wouldn't it be funny if... I stuck a WCS on there.

You can see the killmail for yourself.

Obviously a horrible fit. However, it did work. I managed to warp in and out of the clusterfuck three times before landing in the middle of a group of smart-bombing Archons and got toasted. The really funny part is that the WCS never once helped me. Of course, WCS on Smart-bombing ships is a legit use, although we could argue about SBs being a legit use in small gang or solo PvP. Granted. Either way the ship got me about 36 kms and I ended the day on the positive side of the ledger.

I get to have fun too.

And yes, I knew this would happen. This is, after all, also content. And it is fun. And it doesn't change a thing about wanting WCS banned on PvP ships. If anything it makes it even more obvious.

You can't put it out there if you aren't willing to take it. The kitchen gets hot.

I love the commercial. And I love being made fun of. I deserve it. Heck, we all do.