A Preponderance of Hats 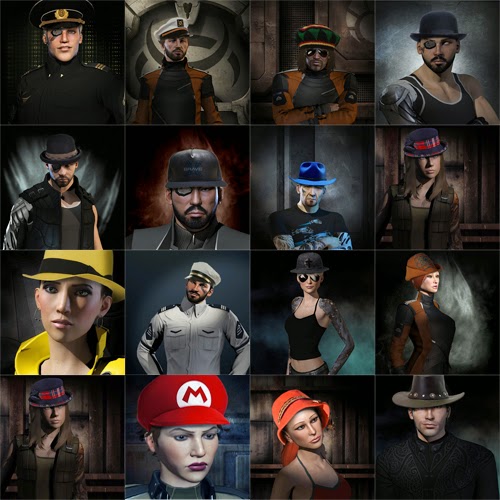 I've been putting hats on Eve Avatars since the Summer of Incarna, shortly after I started my Twitter account and joined #tweetfleet. I've lost count but we are probably talking around 400 or so hats, give or take. Early on it started as simply a lark, a joke even, a protest aimed at mocking the monocle and the idea of over-priced real world monied items in the store. But since those heady days it has slowly and surely evolved into an expression of individualism.

I joke around a lot. I tend to not take things seriously. But after years of plopping hats on top of avatars even I must start to admit - the idea has merit. It is hard now, against the overwhelming preponderance of evidence, to understand why some form of hat is not more widely available in the character creator. Let's face facts here and admit to ourselves that Eve needs hats.

I viewed the subject of hats as a test, a litmus-test, that pushed the envelope of creativity. I use it when I interview potential CSM members, to see where their head is on the subject. Not because I actually wanted hats in Eve, but because I wanted to know how they think. This was before. Once I recently started collecting these hats into a single location on my hard drive, in an effort to preserve them, did it really start to dawn on me. A change in my own attitude towards headwear.

Perhaps it was the recent implementation of Ship Skins? Maybe that is what has pushed things over the edge? If we can have customized on-the-fly ship skins, then why not hats?

And while I am well aware that many of these hats would not be appropriate in the context of in-game Eve - I challenge you to tell me they all wouldn't? Just look at that guy in the upper left corner? That is an Eve hat. The yellow woman? Eve hat. The orange woman across from her? Eve hat. And so many more examples.

Most importantly, from a supplier's perspective, people want hats. In fact, I believe they'd go nuts for them. Our avatars are the only true expression of ourselves in-game. It is about time we got the chance to decorate our heads.

This is getting real. And Eve is real. Isn't it?