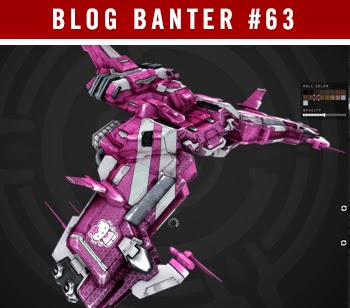 Blog Banter #63 - Customization
Welcome to the continuing monthly EVE Blog Banters and our 63rd edition! For more details about what the blog banters are visit the Blog Banter page.

I'd like to see a room beyond the CQ's door that was like a Corp Club room, a nice open space where those pilots in my Corporation/Alliance currently docked in station could mingle. Nothing super fancy, just a nice room. Maybe customized a bit with Corp/Alliance stuffs, maybe in Pirate colors (or whatever floats your boat). That would also be awesome.

I think it would be great to have the Stay Frosty logo on our ships.

I'd like the ability to bribe the owners of the station we live in to allow us free repair bills. Which might result from some ability to "plant our flag" in local, even though it is Low Sec. That doesn't seem unreasonable.

I honestly don't care much about ship skins, my ships don't typically live long enough for it to matter much to me. Paint your ship pink if you want, I'll still blow it up if given the chance. But I do appreciate that other people want ship skins, so I'm cool with that. I do really, really like the idea of ships aging and getting rustier as they do, bring that on immediately.

That pretty much sums up my feelings about new structures as well. I know it is good for the game and I totally support it, but it won't have much impact on me. But I'm not tunnel visioned enough to dare think everything has to have something to do with me. If it is good for Eve I'm all for it. And it will be. There is no doubt about that.

The point here is that I really don't have a dream list of things I "have to have". All of those things above would be really nice to have, but honestly Eve is pretty great at the moment. We have new ships coming out that transform in space, new structures, new rendering engines, new graphics, new opportunities - all of which is built upon a rather strong foundation of amazing changes that have happened over the past three years.

Which is a weird place to be in the history of Eve. Things are pretty darn good. It even looks like the biggest bug-a-boo since Dominion is headed in the right direction - Null Space Sov is getting some major changes. And they even sound pretty darn decent frankly.

Despite what other people (the kind of people that like to label everyone) seem to think, my campaign about WCS is really a campaign to fix Faction Warfare. But even that isn't terribly broken, it only needs a little more tweaking. And yes, I know, I'm not actually in FW and what right do I have... blah blah blah. I've got news, I live in a FW system. I fly in FW space. And I want nothing more than to have FW be incredibly vibrant and engaging for those that play in it. FW made Low Sec better, and that makes my game better.

So all in all? Yeah there are always things that could be better. And it looks like more and more of those things are going to be placed in the hands of the payers. Which is a good thing.