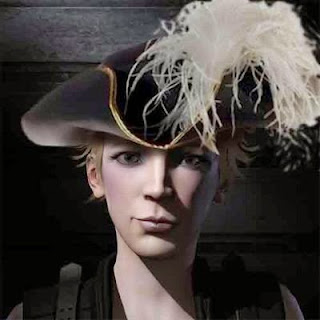 Inspired by our recent trip to Iceland, and Eve Fanfest, my wife recently subbed her first account and began her journey to becoming an ebil pirate. Every so often she'll stop by and let us know how she is doing.


Last week I lost my first ship. I'd become rather bored with the small bounties and the easy kills of the rats in High-Sec. I've spent the last few weeks waiting for my skills to train. One after the other, slowly, my newb modules were being replaced by T2 modules. So I yelled over to Rixx, what do you think about level .4? Isn't that Low Sec? He told me to go ahead, but you're just gonna get blown up. I figured I would just be careful and it would be okay. I was feeling pretty confident in my flying abilities. I did get blown up. However, I learned a lot from that first experience and it was rather exciting.

I had ventured out to the asteroid belts in Carrou, killed some higher bounty rats, bounced out sold stuff then went back and forth, only kind of paying attention to local and d-scan. Had I realized it, I would have noticed that the same folks were popping in and out, yet one person was always staying behind. I was feeling pretty good in my Merlin with my tech 1 guns (hahaha), I had made some big bounties, repaired my ship and went back for more in a belt where I had killed all but one or two rats. And I foolishly stopped paying attention to local and the dscan (duh). I was in the belt trying to take on a Defender when 4 folks popped up in the belt with me. I didn't think too much about it at first, I was having enough problems killing that damn defender, and then I noticed these people were shooting at me, and then I saw the swirly pretty lights and I couldn't warp anywhere. WTF is that???

And just like that my ship was blowed up. Rixx came running in, get your pod out of there, you don't want to get podded! Wait what?!? I got my little pod out and went to a station and thought about what had just happened. Their little spy hung out in the station while I was there, but I already knew enough at that point to wait until the next day to get out.

About a minute went by and I was like REALLY? Four people (five if you count their spy) and a rat to kill one Merlin with tech 1 guns, are you kidding me?!? The ridiculousness of it all was a bit laughable, but I enjoyed it.  Since then, I have been paying a lot more attention to local and the dscan - I am more aware of who is there not just at a glance, and I am now fitted with tech 2 guns (a modest improvement). But I am still gonna publicly mock a group of players who gang up and attack a newb in a Merlin. Seriously, shouldn't you be out there trying to blow up Rixx or something?