A Thanatos Jumps Thru a Gate 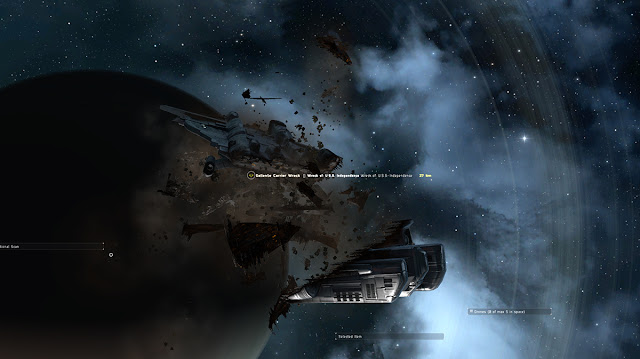 So I'm flying back to Ish last night to dock up for the evening when I spot two Confessors on scan a few systems out. I don't pay much attention to them, they are not on any celestials and Loki links are up in system. I'm alone, so not much can be done anyway. Been a long day and best to call it a night. As usual it takes some time to get to the point where I can log, the small details, organizing the office, take some time to manage. Normal stuff.

Then the call comes in from next door in Nikki, a fleet member is tangling with those two Confessors and needs help. I make a snap decision and pull my anti-Caracal Thorax from the hangar. I dunno, maybe it will work against Confessors. Or maybe at least scare them off. In mid-warp it becomes apparent that two Confessors have turned into three Confessors and an Ishkur with Loki links. Oh and they appear to be remote rep fit. This is not going to go well. As expected the Thorax explodes, it wasn't built for this kind of fight. But that is not the story here, the story is what happened just as it was starting to go down. Y'know, when a Thanatos jumped thru the gate on to us.

Fortunately we have enough in fleet to get point and keep it cycling while we re-ship and try to figure out what to do. After the Thorax exploded Serj Reaper from the Bastards convo'd me, so we decided to merge gangs and jump on comms to organize a quick gank. The key was going to be keeping the Thanny pointed long enough to bring in bigger ships. To help with that I decided to sacrifice my cheapish Vexor Navy to hold the Carrier down as long as possible. By this time, not only had our fleet grown, but so had theirs. It wasn't clear at the beginning who was with who. And if this was bait to a much larger escalation. All unknown at the time.

Of the hundreds of ships in my hangar it figures I don't have a HIC fitted, so I decide to grab a Hyperion. We have another Carrier coming and Serj happens to have a Nag in system. We figure it is best to make this as short as possible and try to keep the chances of being Hot Dropped to a minimum. Our brave Stay Frosty gang members are holding points in cycles, while the original gang is still shooting at them and the Carrier. It is a confusing mess and there are several moments when it looks like we've lost point - only to have someone else step in and announce they have it. I can't say enough about their efforts, well done.

Finally, after what seems an eternity (but is only a few minutes), we have our gang on the Carrier. We even have our own armor reps, links, and support up and running. The original gang pulls away and I manage to get point and double-webs on the Carrier. Then the Nag lands and and really brings the deeps. The Thanatos goes boom. 2.5b baby. Some decent loot and some Geckos, Fighters, and a very pretty wreck.

We loot what we can and then decide to bring a salvage freighter in to scoop the rest. We re-ship into web ships, me in a Rapier, so we can get the Freighter in and out faster. The Charon gets in without any problems, but shortly after we land a small TEST gang appears to harass the Freighter. We pop webs on it and head back to station. Luckily we manage to pull some decent loot and grab the remaining Geckos and most of the wandering Fighters. Freighter safely back in station, I dock up the Rapier and we start dividing the spoils.

And then the call comes from the gate, the original Confessor/Ishkur/Loki gang is back and engaged. I pop a Myrmidon into space and warp off to help. We finally have enough dps to break their chain and the first Confessor pops pretty quickly. Then the second. Then we all turn our guns on the link Loki at once and it goes down pretty much instantly. The remaining ships wisely de-aggro and jump out.

All of which took about twenty minutes or so from start to finish. In the end I think we made off with close to 5b in total loot and ships destroyed to only a couple Cruisers, and a couple of Frigates lost. I haven't done the math, but I bet our total losses are less than 500m.

A special call out of thanks to Serj for organizing the merge and for being willing to bring the Dread Hammer out of station. What I may not have mentioned above was the constantly incoming Intel situation and the threat of escalation, which shouldn't be overlooked. It was ongoing. Being able to bring the Thanny down quickly was important to making it out safely. And a special nod of thanks to the brave Stay Frosty pilots who kept their cool and kept points on the Carrier while we organized. Well done.

You never know when a Carrier will unexpectedly jump thru a gate into your lap.

I mean, it does happen. See above.