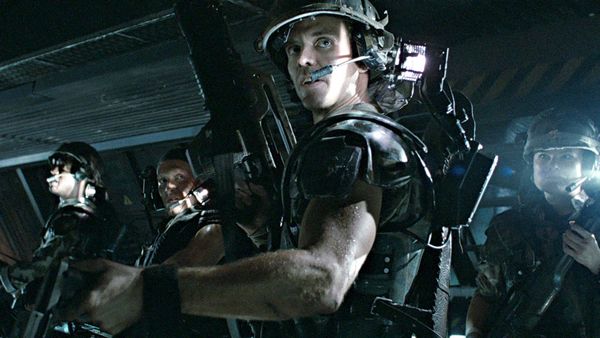 If Stay Frosty can be said to have a Patron Saint, it would be Corporal Dwayne Hicks of the United States Colonial Marines. Not only did he famously tell his fellow Marines to "Stay Frosty" under tremendous and relentless alien attack, but he also kept his small gang alive long enough for the credits to roll. Like any good pirate roam, not everyone made it back alive, but he certainly turned out to be the best FC on LV-426 that day. And he helped inspire one badass heroine to "nuke the site from orbit" when the chips were down. Hicks embodies many of the qualities that make Stay Frosty pilots both feared and loved through-out New Eden.

Which is why we have a monthly award named after him. The Hick's Award is given each month to the Stay Frosty pilot with the most total and solo kills for that month. (In fact, almost all of our awards are named after characters from Aliens, we have a Ripley, Apone, Vasquaz, and others as well.) Winning the Hicks has become a symbol of pride and determination in our Corporation, the competition can get rather fierce each month. To say the least. Winning is not only about getting the "most" kills, but a testament to each pilot's dedication to doing so. For our game-style it comes with a significant cost associated with it, not only to man and machine, but to time as well.

For me it has always been the time part that has gotten in my way. While I try to play Eve every day, that isn't always possible. And even when I do, playing for extended periods of time is nearly always impossible. I've always been perfectly happy to be in the Top Ten each month (except for March of this year when I was at Fanfest). I've always taken the long view and Eve is certainly the perfect place for such an approach. 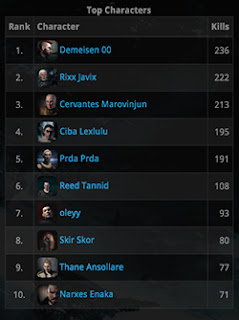 And then my wife started playing Eve and suddenly my available time to play got extended a little more. And this month it seemed I might have a good chance to finally claim my own Hick's Award. But it is a competition after all and 222 kills for March was simply not going to be enough.

Congratulations to Demeisen 00 for winning the Hick's Award for May 2015. And to Prda Prda for 149 Solo Kills. Well done and well deserved. With the AT Tournament looming and practices and preparation underway, it'll probably be another three months before I have the time to make another run.

If it even happens then.

Frankly I was not completely comfortable playing the way I needed to play in order to accumulate so many kills this past month. If I normally play at 10, chasing the Hick's Award seemed like turning that up to 11. While I did manage to get 222 kills I also managed to lose 68 ships, which is the most I have ever lost in a single month. I did keep my efficiency at 72%, only 3 percentage points lower than the 75% I strive for. (I stand at 78% overall) So it wasn't like it was a horrible month. It wasn't. But I took chances I normally wouldn't take and derped a few fights I would normally win. A few times I hurried back to re-ship without thinking about it properly, and on one of those I paid for it with a Pod. Something I really try to avoid at all costs.

I know that our Patron Saint would agree that winning at any cost is worth the sacrifice. And it most certainly is in our line of work. And I am fully aware that I may be overthinking this, as usual.

I do know that I need a rather large shopping trip as soon as possible. I end the month with not a single fitted small ship in my hangar, other than a few Daredevils, a Garmur, and a Neut Tristan. All that survived a month of insanity, fun, and daring do. It was a blast and I wouldn't have changed a moment of it.