Avatar over Manhattan: Making Of

Sometimes I do things for no damn good reason. Last week I had posted an image of an Imperial Star Destroyer hovering directly over Manhattan on Twitter, and nothing wrong with that image, but this is Eve! So the idea of that stuck with me and today I had a few minutes and thought, why not?

So I thought I'd share with you how I created the image. First I needed a great shot of New York that included Manhattan Island from a high altitude. And you can't do any better than a great shot from the International Space Station. 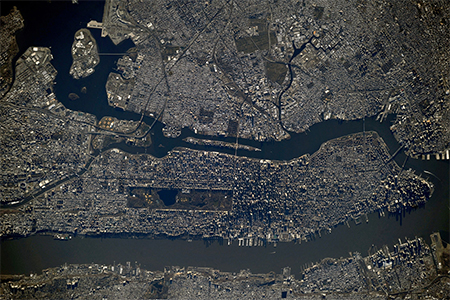 Next I needed a Titan. I decided on the Avatar simply for icon value. The Avatar is the single most popular Titan in Eve and it is incredibly distinctive in design. No other reason really. It works well and I've used it before. 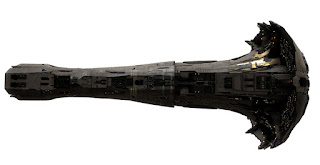 So I grabbed a nice big image of the Avatar from Project Jeremy and brought it into Photoshop with the Manhattan image. The next few bits are the usual things I do to start making two images feel like one. This involves removing the Avatar's background obviously, but also giving the edge a slight blur to achieve a "aliasing" feel between two objects. This is important so it doesn't look "cut-out". Next is color correction, the two images were not shot together but they need to feel that way. So make sure both are balanced, and then tweak from there. 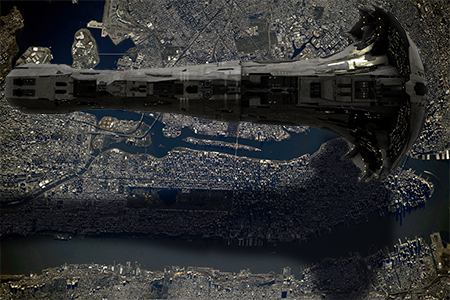 I added a shadow and things started to feel pretty good. Originally I had the Titan a bit larger, but then I figured it wasn't just sitting right on top of the island - it seemed better if it was at altitude. So a slightly smaller Titan meant it would all fit into frame, also another plus.

But the image feels lifeless and kinda bland. Sterile. You know what it needs? 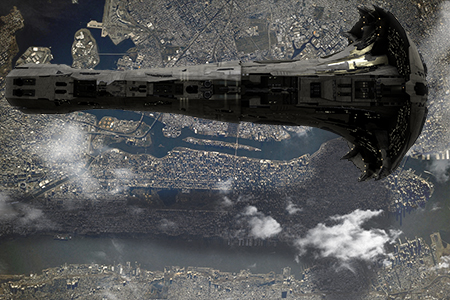 Yeah clouds really make it come to life. I also color keyed the image of Manhattan a tiny bit to make the Titan pop, but also to further convey a sense of size between the two objects.

After that it was more color correction and the decision to swing everything over to a nice blue shade to give it even more life. Add a tiny bit of noise to even out the merge and bingo. Save to Flickr.

PS: There has been some debate as to the effects such an object would have on the City and people below it. If we remove any effects from propulsion and assume it is simply floating there, then the effects would be as close to zero as to not matter. The difference between 2^9kg mass and the Earth's 10^24kg mass. Nothing would happen. Much like hovering a baseball over a bowl of water, to steal Sander's analogy.

Now, in Eve terms, the Titan would be in some trouble. Tritanium is unstable in atmospheric conditions, "The Tritanium in your ship breaks apart in an atmosphere, might not want to do that." So it would be melting, or breaking apart, or whatever. Plus we'd need something to keep it afloat so close to the surface, Earth's gravity is certainly causing a lot of stress on the Titan. Not to mention how it got so close to begin with.

Best not to think about these things.